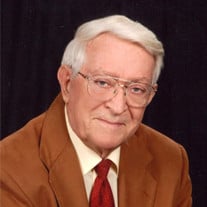 Max E. Lundquest, 85, former Industrial Arts and Technology teacher, passed away on July 5, 2016, in his home. Max Eugene Lundquest was born April 30, 1931 in Bronaugh, Missouri to Howard and Dauphene Lundquest. He graduated from KSTC (now PSU) in 1953, and received his Master's Degree in 1964, also from KSTC. He married Helen Meek on June 10, 1951. They had recently celebrated their 65th anniversary. He taught in the Pittsburg School District from 1959 until his retirement in 1993. He co-founded Pitsco in 1971, and worked with Pitsco until 1974. Max was instrumental in changing the Industrial Arts curriculum into the current Technology curriculum in classrooms nationwide. He received the State of Kansas Outstanding Teacher award in 1978, The PSU Meritorious Achievement Award in 1994. In 2014, the Max E. Lundquest Rising Star Award was created by the International STEM Education Association (ISEA) in his honor. He was active in the Pittsburg Lion's Club for many years. He and his wife, Helen, drove the Wesley House bus for many years, and did emergency delivery of eyes for the eye bank for several years. He attended the First United Methodist Church. Max got tremendous enjoyment out of building things, such as a 32 Ford Woodie now in a Lincoln Nebraska museum, two houses, a wide variety of full size and miniature furniture, and a miniature pony carriage. He is survived by his wife Helen, three children: Gary Lundquest (and wife Maria Bartolo) of Austin, TX; David Lundquest of Hiawatha, KS; and Judy Keith (and husband Robert) of Webb City, MO; a sister, Jean Lavon Tims of Grain Valley, MO; a brother Don Howard Lundquest (and wife Sherry)of Lindale, TX; two grandchildren: Eric Row of Ottawa, KS; and David Row (and wife Rebba) of Colorado Springs, CO; 2 great-grandchildren; several nieces and nephews. Preceding him in death were his parents Howard and Dauphene Lundquest. The family would like to thank Dr. Mark Carlson and his staff, the Via Christie 4th floor nursing staff, and Avalon hospice for all their help and support. Family will receive friends from 6-8 pm, Tuesday evening on July 12, 2016 at the Bath-Naylor Funeral Home in Pittsburg. The family requests no phone calls at this time. The family suggests memorials to the First United Methodist Church organ fund, Wesley House, or Pittsburg Lion's Club. These may be left at or mailed to the funeral home. Condolences may be left at www.bathnaylor.com. Services by Bath Naylor Funeral home, 522 S. Broadway, Pittsburg, KS 66762.

The family of Max Eugene Lundquest created this Life Tributes page to make it easy to share your memories.

Send flowers to the Lundquest family.