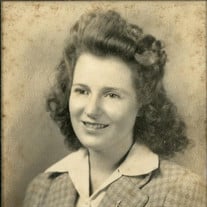 On February 29, 2020, Mary Pierson rejoined her Heavenly Father. Mary Ellen Stark was born on March 12, 1925 to Clarence and Beulah (Burch) Stark in Webb City, Missouri. Mary and her children would remember Clarence as a kind, patient man who would run into town for treats or sit with sick grandchildren. Beulah liked to name all their cows and cats with special names. After Beulah’s passing, Mary would piece together quilts from the fabric of Beulah’s dresses. Mary graduated from Weir High School in 1943 and married William Pierson in 1946. Mary was a hard worker and throughout her life worked in aircraft, munitions, textiles, health care and funeral business, waiting until her 80s to retire, remarking that she guessed she had worked enough. Mary was an independent woman who took care of herself and her family for many years. Mary was an avid reader and served on the Weir Public Library Board. In addition, Mary also enjoyed gardening and continued taking care of her yard well into her 90s. She would pass along bulbs to her children, and when the hickory tree that her father had planted had to come down, she made sure to pass along seeds to her children and grandchildren. Mary lived in her parents’ house and it was important to her to pass along literal and figurative seeds of the family history. Mary was proud of her children and would keep scrapbooks of their sports and achievements. A visit to her house would include family stories and perhaps some handy clothes hangers wrapped in yarn or some iris bulbs to plant. Mary was preceded in death by her parents; her sisters, Bessie Jamison, Lorene McCullough, and Pauline Robinson; her brother, Chester Stark; her daughter, Mary Elizabeth Pierson; and her sons, Roger and William “Butch” Pierson, Jr. Mary is survived by her daughter, Becky (Dave) Tillman; and her sons, Charles (Mary) Pierson, Kenneth Pierson, Stan (Laurie) Pierson, and Andy (Cheryl) Pierson. She is also survived by 20 grandchildren and 30 great-grandchildren. A celebration of her life for friends and family will be at the Weir Senior Citizen Center on Thursday, March 12, Mary's birthday, from 1:00 to 3:00 PM. No flowers please.

On February 29, 2020, Mary Pierson rejoined her Heavenly Father. Mary Ellen Stark was born on March 12, 1925 to Clarence and Beulah (Burch) Stark in Webb City, Missouri. Mary and her children would remember Clarence as a kind, patient man who... View Obituary & Service Information

The family of Mary Pierson created this Life Tributes page to make it easy to share your memories.

Send flowers to the Pierson family.