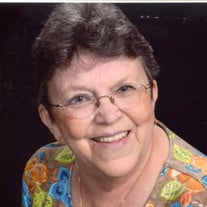 Mary Catherine Kucera Roberts LeClerc 1946-2016 Mary C. LeClerc of Pittsburg, Kansas died quietly and peacefully in her home on Friday, July 8, 2016. Mary was born March 10, 1946 in San Francisco, CA. Mary's parents were Marie Hess of Cedar Rapids, Iowa and Howard Kittleson of Ventura, CA. Mary was raised by her maternal grandparents, Esther and Hugo Drews of Traer, Iowa. She grew up and went to school in Traer. Mary was a member of the Frontenac United Methodist Church. She was employed as a nurse, and a bookkeeper. In retirement she became a gifted quilter and is well known in quilting circles and groups. Mary is to be honored by the Little Balkans Quilting Guild as the recipient of their first annual Lifetime Achievement in Quilting Award. Survivors include three sons: Mike Roberts of Sierra Vista, AZ, Mark Roberts of Marionville, MO, and Jeff Roberts of Tama, IA. Mary is additionally survived by her husband, Thomas LeClerc of the home, and five grandchildren: Kelley Roberts of Wooster, MA, Greg Roberts of Ft. Leonard Wood, MO, Ashley Boyd of Anderson, MO, Caitlyn Plank of Aurora, Mo and Martin Mongello of Washington, DC., her mother Marie Hess of Cedar Rapids, IA, and five half-brothers and sisters, Kathleen Depuis of California, Diane Stone of Ventura, CA, David Kittleson of Ventura, CA, Stephen Kittleson of Ventura, CA, and Judy Barnard of Cedar Rapids, IA, along with six great-grandchildren. She was preceded in death by a son, Jean-Richard LeClerc, of Boulder, CO in 1995. A memorial service will be held at 11:00 am on Saturday, July 16, 2016, at the Frontenac United Methodist Church. Mary's ashes will be scattered privately by her family at a later date. Condolences may be left at www.bathnaylor.com. Memorials may be made to the Kids First Day Care in Frontenac and/or Avalon Hospice; these may be left at or mailed to the funeral home. Cremation arrangements are by Bath-Naylor Funeral Home 522 S. Broadway, Pittsburg, KS

The family of Mary Catherine LeClerc created this Life Tributes page to make it easy to share your memories.

Send flowers to the LeClerc family.