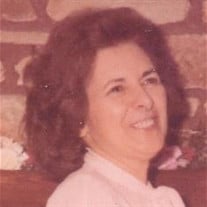 Mary E. Cocchi (nee Ricci), 87, died 1:15pm, Sunday, June 4, 2017 at the Medicalodges nursing home, Girard KS, where she lived for the past four years, after a lengthy illness. Mary was born October 10, 1929 in Ridley Township, PA, the daughter of Pasquale and Erminia (Pincelli) Ricci. On May 21, 1949, Mary married her beloved husband and best friend, James G. Cocchi. He predeceased her in 1994. Mary and James spent their first 21 years as a Navy family, stationed in many bases, including Spain, Japan, and Africa, fulfilling youthful dreams of traveling the world. Mary was a talented quilter, seamstress, crafter, and a voracious reader. Survivors include her children Mona (Bill) Wax, James (Faye) Cocchi, and Richard (Joyce) Cocchi; her grandchildren Richard Cocchi, and Meishee and Jessica Cocchi; her sisters Teresa Shaeffer, Ann Poole, and Edith Casey; and many nieces and nephews. Mary was preceded in death by her parents, her sister Stef Dougherty, and her brother Pat Ricci. Private services will take place at a later date in Pennsylvania. In lieu of flowers, donations to St. Judes Childrens Hospital would be much appreciated. Arrangements are by Bath-Naylor Funeral Home in Pittsburg, KS.

The family of Mary E. Cocchi created this Life Tributes page to make it easy to share your memories.

Send flowers to the Cocchi family.