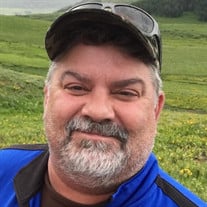 PITTSBURG, KS – Martin A. “Marty” Cook, 53, died April 22, 2017 at his home. He was born January 23, 1964 in Chanute, KS the son of Dale and Shirley Carstedt Cook. He had been a resident of Pittsburg since 1983, moving from Chanute. He graduated from Chanute High School, attended Neosho County Community College for one year and graduated from the Automotive Technology Department at Pittsburg State University. He married Karen L. Conant on August 2, 1986 in Chanute. She survives at the home in Pittsburg. Mr. Cook was a mechanic, working at Kings Automotive, Molle Automotive and for the USD 250 Transportation Department the past three years. He was an avid hunter and fisherman, was very involved in car restoration, and a avid PSU Football Fan. Survivors include his wife Karen of the home, one son Joel Michael Cook of Fayetteville, Arkansas, one daughter Bethany Ann Cook of Pittsburg and her fiancé Kyle Michael Davis, his parents Dale and Shirley Cook of Chanute, two brothers Jeff Cook (Cindy) of Ballwin, MO, Matt Cook (Tammy) of Chanute, one sister Becky Stich (Joe) of rural Chanute, and his father in law Pat Conant of St. Joseph, MO who was a former long time Chanute resident. He was preceded in death by his mother in law Jacqueline Conant. Funeral services will be 2 pm Friday, April 28, 2017, at the Bath-Naylor Funeral Home, 522 S. Broadway in Pittsburg, with Dan Muter, officiating. Inurnment will be at a later date. The family will receive friends from 7 to 8 pm Thursday, April 27, 2017 at the funeral home. A memorial has been established for his children’s education in care of Karen Cook. Condolences may be left at our web site www.bathnaylor.com.

The family of Martin "Marty" A. Cook created this Life Tributes page to make it easy to share your memories.

Send flowers to the Cook family.