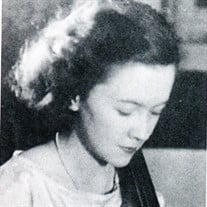 Martha Lee Baxter 95, of Pittsburg, KS died 7:53pm Sunday February 9, 2020 at her home following an illness. Martha was born March 6, 1924 in Pittsburg, KS the daughter of Sylvester W. and Maud J. (Delahunt) Baxter. Martha Baxter, a native of Pittsburg, began Piano studies at the age of six and her long association with the Cello when she turned twelve. She graduated from the University of Kansas with a double major in Theory and Cello performance. She taught both of these at a Women’s College in Texas while earning a Master’s degree in Theory from the University of Texas at Austin where she served as a teaching assistant. Leaving Texas for Oklahoma, she spent three years playing Cello with the Oklahoma City Symphony. For two of these years, she was also the Librarian. Circa 1950, Baxter moved to New York City in order to explore opportunities for employment in the field of music. Her first job was with Boosey and Hawkes, Music Publishers. She started as a Secretary, but within six months, she was promoted to the position of Director of Education. About twelve years later, she moved to the Frank Loesser Publishing firm, also as the Director of Education, where she remained for a little over three years. During her tenure in music publication, she met and worked with many notable performers and composers such as Aaron Copland, Leonard Bernstein, and Alberto Ginastera. It was then that she began a thirty-year career in New York Real Estate, but she didn’t leave music. Recovering from a broken wrist that she injured while playing baseball, and not wanting to lose the skill she had developed as a Cellist, Baxter began to take advantage of the prodigious opportunities to perform with excellent Chamber musicians on a regular basis. She played with numerous amateur Quartets, Trios, etc. It was this continuous Chamber performance experience that almost caused her to remain in New York upon retirement in the early 1990’s. She decided, however, to return to Pittsburg where she joined the Cello section of the Southeast Kansas Symphony--soon to become Principal. The Friends of the SEK Symphony had been established shortly before her arrival and she was invited to become the Manager, a position she held for many years, helping in the development of the organization. Baxter remained dedicated to the art of Music and continued to perform orchestral and chamber music at every opportunity. Martha was also involved with SEK String Quartet, Meals on Wheels, Italian Heritage Society, several Bridge Clubs, SEK Humane Society and volunteered her time as an audio reader. Survivors include cousins Dana Spilios and Dean Spilios; and special friends Gene Vollen and wife Linda of Pittsburg, KS. Martha was preceded in death by her parents and a brother. Due to COVID 19 all Memorial Services will be cancelled for Martha Baxter on Saturday March 28, 2020. Further information will be posted at a later date. Arrangements and services are under the direction of Bath-Naylor Funeral Home of Pittsburg, KS. In lieu of flowers the family asks expressions of sympathy to be in the form of memorials to the SEK Symphony. Friends may drop off or mail memorials to the Bath-Naylor Funeral Home 522 S. Broadway Pittsburg, KS 66762. Condolences may be left at www.bathnaylor.com.

The family of Martha Lee Baxter created this Life Tributes page to make it easy to share your memories.

Send flowers to the Baxter family.