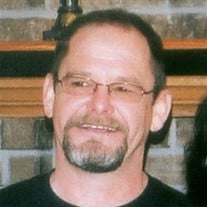 Mark Alan Hudson, 61 of New Sharon, Iowa died November 7, 2019. He was born 7-12-58 in Burlington, Kansas the son of Richard and JoAnn Hudson. Mark attended schools in Pittsburg, Kansas and then went on to Graduate from the Colorado School of... View Obituary & Service Information

The family of Mark Alan Hudson created this Life Tributes page to make it easy to share your memories.

Send flowers to the Hudson family.