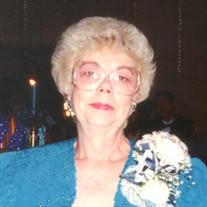 MARJORIE K. (FRIEL) BENEDICT Marjorie K. Benedict, 86 of Frontenac, Kan. died Thursday, December 30th, 2021 at Ascension Via Christi Hospital in Pittsburg, Kan. She had been in ill health for a number of years. She was born August 3rd, 1935 in Pittsburg, the daughter of Hugh A. and Myrtle (Lloyd) Friel. Marjorie retired as a state employee from the Social Rehabilitation Services agency in Pittsburg after many years but had previously worked at the Holiday Inn front desk and as a dispatcher for the Frontenac Police Department. She graduated from Pittsburg High School as a member of the class of 1953 and also achieved a teaching certificate from Kansas State Teachers College (currently Pittsburg State University). Marge was an avid bargain hunter and decorator and spent many happy hours wandering through garage sales, flea markets and antique shops with her daughters and grandkids looking for the next treasure that could be repurposed. Her family joked that she would be buried with a can of gold spray paint because that was her favorite tool (and color) when upgrading her finds. Before her health began to fail, she took great pleasure in helping friends decorate for weddings and was a master at flower arrangements and wielding a glue gun. Christmas was her favorite time of year and she loved hanging wreaths, decorating a tree and spreading the joy of the season throughout her house. Her family has a long tradition (started by her mother in the 1930s) of serving home-made pimiento cheese sandwiches along with a spread of other home-made dips and dishes on Christmas Eve to friends and family. The tradition of grinding the ingredients and making the dressing has continued with her daughters. She was a loyal friend and had a wide range of people that she kept in touch with across decades of moves. She loved to visit and catch up and was happy to share the news with the next person she talked to. Her daughters, grandchildren and great-grandchildren were the lights of her life and she was proud of all of them. Survivors include two daughters: Kim (Rick) Benedict Gregory of Ardmore, Okla. and Lisa (Bernard) Otto of Drexel, Mo. along with five grandchildren: Andy (Courtney) Otto, Katy (Jacob) Hughes, Tony Otto, Jeny Otto and Taylor (Cody) Gregory Steele; and five great-grandchildren, Finley, Sawyer and Baylor Otto and Owen and Maisie Hughes. Grandchild number six is on the way and Marge was anxiously awaiting their arrival. Her cousin Mary Dock was a life-long friend and in her later years played a critical part in Marge being able to stay in her home. She married Kenneth Benedict in Pittsburg in 1956 and they later divorced. She was preceded in death by her parents. Funeral services will be 1pm Tuesday January 4th, 2022 at the Friskel Funeral Home in Frontenac with Adah Hutchcraft officiating. Burial will follow in the Mt. Carmel Cemetery, Frontenac. Condolences may be left at www.friskelfuneralhome.com. Memorials may be left to the Arthritis Foundation; these may be left at or mailed to the funeral home.

MARJORIE K. (FRIEL) BENEDICT Marjorie K. Benedict, 86 of Frontenac, Kan. died Thursday, December 30th, 2021 at Ascension Via Christi Hospital in Pittsburg, Kan. She had been in ill health for a number of years. She was born August 3rd, 1935... View Obituary & Service Information

The family of Marjorie K. Benedict created this Life Tributes page to make it easy to share your memories.

Send flowers to the Benedict family.