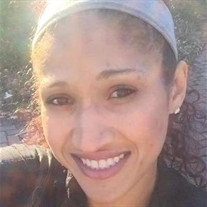 Marisa Brin Stotler 28, of Pittsburg, KS passed away unexpectedly 4:30pm Monday June 27, 2016 at the Freeman West Hospital in Joplin, MO following a sudden illness. Marisa was born September 22, 1987 in Colorado Springs, CO the daughter of Lori Lea Stotler of Pittsburg and Michael Devereaux (Michelle Devereaux) of FL. Marisa has lived in this community for the last 5 years. From Marisa’s beginning her intelligence and sweetness was apparent. She wrote her name the day she turned three. She was in Montessori school through 1st grade then went on to Mesa public schools. Marisa graduated from Dobson High School in Chandler, AZ in 2006. She was a Varsity Basketball player her freshman thru senior years at Dobson and her playing ability allowed her to receive a full athletic scholarship to Washington State University. She went on to play for Boise State and Southern Polytechnic State University Marietta, GA. After leaving GA she finished up her Marketing Undergraduate degree at Pittsburg State University and earned her Master’s Degree in Business Administration from Pittsburg State University on May 7th 2016. She was a Graduate assistant her last semester while working at Applebee’s in Pittsburg, KS. Her immediate plans were to move to Wichita, KS with her boyfriend Elliot Soyez the 22nd of June and start a new job she was offered. Marisa enjoyed running and working out. She completed a 50k and a few other Marathons with in the last five years. She most enjoyed her family and friends, music, working hard and pampering herself with the things she enjoyed most. Survivors include her parents; siblings Eric Michael of Littleton CO, Miann Devereaux of Atlanta, GA, Bradley Devereaux , Michael Jr. Devereaux and Adianne Devereaux of Florida; maternal grandmother Shirley Stotler of Pittsburg, KS; paternal grandparents Fred and Mary Devereaux of Texas, maternal step grandmother Frankie Stotler, Frontenac, Aunts; Shelley Stotler, NM, Lisa Stotler, KS, Phreda Devereaux–Armour, CA Uncles; Michael Stotler NV, Brian Stotler, UT, Fred Devereaux, TX Ron Devereaux, AZ and Families. She is preceded in death by her maternal grandfather Parker Stotler and Truley Stotler. Services are pending and will be announced on facebook. Cremation arrangements are by Bath-Naylor Funeral Home of Pittsburg, KS.

The family of Marisa Brin Stotler created this Life Tributes page to make it easy to share your memories.

Send flowers to the Stotler family.