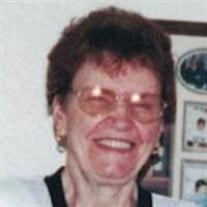 Marilyn Joann Beaver, 81, of Pittsburg, KS passed away on Saturday, March 18, 2017 at Via Christi Hospital in Pittsburg, KS. After several years of declining health, she succumbed to pneumonia and sepsis. She was surrounded by her family as she entered Heaven and her Lord’s eternal embrace. Marilyn was born August 19, 1935 in Mindenmines, MO to Marion and Letha (Robson) Moore. She spent her childhood in Mindenmines, attending Mindenmines schools. She was a 58-year-resident of Pittsburg. She entered Via Christi Village in 2013 after her health had declined to the point she required round-the-clock assistance. However, as a testament to the true meaning of Love and their wedding vows, her lifelong best friend, soulmate, and husband, Keith, attended to her needs every day from 9:30 AM to 5:30 PM. She married Keith Beaver on December 15, 1953 in Mindenmines, MO. Their devotion to each other remains an inspiration to those who knew them, and provided an example to their children and grandchildren of how family, while never perfect, is the bedrock of a life well lived. This can also be seen in how they provided babysitting, guidance, and support through the formative and into the adult years of each of their five grandchildren. Marilyn worked as a Resident Manager alongside her husband at North Joplin Apartments for 27 years, retiring in 2002. She was an active member of the Light House Tabernacle Church in Pittsburg while her health allowed to attend, and she remained under the guidance of Pastor Daryl Gaddy during his weekly visits to Via Christi Village. Marilyn was very devoted to her family and loved to crochet and sew. In her younger years she enjoyed crocheting outfits for her daughter’s dolls. Sherry said one of her most memorable moments with her mom was when Marilyn crocheted a wedding dress for Sherry’s doll “Tammy,” and sewed a suit for Sherry’s doll “Ken.” She also enjoyed listening to Christian music and reading. Survivors include her husband, Keith Beaver; Daughter, Sherry Chapman and husband Jim Chapman; sons, Michael Beaver, Mark Beaver and his wife Dianne; 5 grandchildren and 10 great-grandchildren. She was preceded in death by her parents; brother, Larry Moore; and grandson, Nathan “Nonny” Chapman. The Family will receive friends from 5-7pm Wednesday, March 22, 2017 at Bath-Naylor Funeral Home in Pittsburg, KS. Funeral service will be 2 pm Thursday, March 23, 2017 at Bath-Naylor Funeral Home in Pittsburg KS with Pastor Daryl Gaddy presiding. Burial will follow at the Crocker Cemetery in Pittsburg, KS. The Family invites friends and relatives to share memories and celebrate Marilyn’s life at a reception from 5-7, March 23, 2017 at the Homer Cole Community Center, 3003 North Joplin St, Pittsburg. E-mail condolences may be left at www.bathnaylor.com. Arrangements and services are under the direction of Bath-Naylor Funeral Home of Pittsburg, KS.

Marilyn Joann Beaver, 81, of Pittsburg, KS passed away on Saturday, March 18, 2017 at Via Christi Hospital in Pittsburg, KS. After several years of declining health, she succumbed to pneumonia and sepsis. She was surrounded by her family as... View Obituary & Service Information

The family of Marilyn Joann Beaver created this Life Tributes page to make it easy to share your memories.

Marilyn Joann Beaver, 81, of Pittsburg, KS passed away on Saturday,...

Send flowers to the Beaver family.