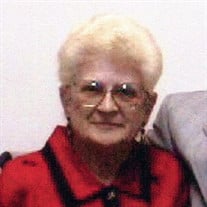 Marietta F. Hastings-Casper-Rogers, 85 passed away on November 11, 2020 in Rogers, Arkansas. She was born to Howard Hastings and Ethel (Sheler) Hastings on July 14, 1935 at Hutchinson, KS. The family moved to Chanute, KS in 1947 where Marietta finished her education at the schools in Chanute. Marietta married Harold James (Jim) Casper in 1954 at Chanute, KS. One daughter Faye Marie was born to this union. The couple moved to California to be near his parents and brother who relocated there. The couple later divorced and Marietta met James Rogers in Springville, CA where she was employed as an area manager of the housing authority of Tulare, CA. Marietta and James were married on April 3, 1983 at Springville. The couple remained there until 1991 when Marietta transferred to the Porterville office for the housing authority, she retired from the housing authority in 1992. Marietta began working at the age of 12 babysitting after school and weekends for Truitt’s of Chanute, KS. Once she reached the age of 16 and got her driver’s license she started delivering flowers and assisting in making corsages, flower arrangements, etc for Truitt’s Greenhouse. Marietta worked various jobs during her life but one of her favorite jobs was with the housing authority where she managed 118 units for the elderly and/ or disabled. Once the couple returned to Kansas she worked for 10 + years for Jones Realty in Pittsburg, KS and one year for the senior nutrition program in Pittsburg. James had wanted to move back closer to his home state of Oklahoma and so the couple moved to Thayer, KS and opened a small restaurant and bakery. James became allergic to the cleaning supplies for the grill and so the couple decided to move back to California where Marietta had planned to work once again for the housing authorities. James got a call to go work for the Blind Association in Pittsburg, KS at a factory that made plastic bags and other articles, this was a blessing for James who had been legally blind since birth. James worked for the blind association for 10 years and so Marietta came out of retirement and got a job in Pittsburg, KS doing bookwork for an auto body shop for a short time and then took the job at Jones Realty and finally the senior nutrition program. Marietta finally retired in 2009 at the age of 74. James passed away on September 8, 2008 and Marietta’s daughter asked her to move to Arkansas to be near her. Marietta was raised in the Methodist faith but after meeting James and attending church with him she joined the Church of Christ in Springville, CA. The couple attended the Church of Christ in whatever town they moved to and spent 16 years with the congregation in Pittsburg, KS. Marietta was currently a member of the Southside Church of Christ in Rogers, AR where she served on committees involving the prison ministry, card signing and the church library. Survivors include her daughter Faye Ridpath and husband Jeff of Rogers, AR, a niece Paula Hastings of Del City, OK, sister-in-law and brother-in-law Wilma and Bill Adkins of Tipton, CA, a niece Marietta Hunter of Derby, KS, a niece Mary Hastings of Las Vegas, NV and a nephew Russell Barker of KS, plus numerous great nieces and great nephews. She was preceded in death by her husband, James Rogers, her parents and brothers Harold, Paul, Charles and Donald Hastings, sister Shirley Barker and sister in-law Pauline Hastings. Graveside Services will be 11:00am Friday November 20, 2020 at the Thayer Cemetery, in Thayer, KS. Informal Visitation will be from 12-5:00pm Thursday November 19, 2020 at the Bath-Naylor Funeral Home in Pittsburg, KS. In lieu of flowers the family asks expressions of sympathy to be in form of memorials to the Sisters in Action and/or Green Valley Bible Camp. Friends may drop off or mail memorials to the Bath-Naylor Funeral Home 522 S. Broadway Pittsburg, KS 66762. Condolences may be left at www.bathnaylor.com. Arrangements and Services are under the direction of Bath-Naylor Funeral Home of Pittsburg, KS.

Marietta F. Hastings-Casper-Rogers, 85 passed away on November 11, 2020 in Rogers, Arkansas. She was born to Howard Hastings and Ethel (Sheler) Hastings on July 14, 1935 at Hutchinson, KS. The family moved to Chanute, KS in 1947 where Marietta... View Obituary & Service Information

The family of Marietta F. Rogers created this Life Tributes page to make it easy to share your memories.

Send flowers to the Rogers family.