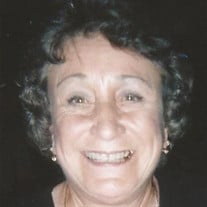 PITTSBURG, KS – Marie Celin “Mickey” Brinkman, 82 of Pittsburg, died June 11, 2017 at Via Christi Hospital in Pittsburg. She was born July 3, 1934 in Frontenac the daughter of Fritz and Evelyn Devlin Eichhorn and had been an area resident for most of her life. Mickey did many things in her life; her proudest moments far and away were having us five kids. This all started when she met a handsome young man in college named Gene Bicknell. Although their lives went different directions, they remained very close to this day. She later married Dick Brinkman; he passed away a few short years later. Mom had many interests, she loved working in her yard, paying us a few dollars to rake up leaves or pull weeds. She had a bridge club for several decades. She was an avid golfer, setting the Crestwood Country Club course record June 17, 1983. With her love for golf, she made many friends, too many to name, and she was very competitive, often traveling with her buddies to play in tournaments. Mom was a very good bowler as well. We kids couldn’t wait for Friday night bowling and we got a whole quarter to spend! She also helped start Four Paws, and was very proud to be a part of the work they do. Mickey and her good friend Valerie Stites started Affordable Tax Service. Through hard work, they eventually gathered more than two thousand customers! It still thrives today. She retired after 27 years of service. If you knew Mickey, then you knew she LOVED CATS! Lots and lots of cats! I can talk on this subject for a long time but I won’t. We can sum up her love for cats for everyone with one story. One night, a huge storm was headed our way. I jumped in my truck and sped over to get her. When I walked through the door, she asked why I was there. Mom, you got to come with me to a safe place. You mean because of the storm? Yes, there have already been tornados spotted on the ground! Well ya better hurry because you know I’m not leaving my cats! Mickey, known as “MeMa” was also proud of her 18 grandchildren, and her 11 great-grandchildren (with number twelve on the way). She is survived by four children, Gena and her husband Rick Gallager, Springfield, MO, Mitch Bicknell and Vicki Wadino of Pittsburg, Mike Bicknell and wife Angela of Pittsburg, Marty Bicknell and wife Cheryl of Overland Park, sister Margie Eichhorn of Pittsburg, many many nieces and nephews. She was preceded in death by her beloved daughter Diney Deruy, her mother, father and a sister Mavis Thomas. Mom will be sorely missed, her wishes are to be cremated and the family will have a private graveside ceremony at Highland Park Cemetery in Pittsburg, on a later date. Her services will be hosted by the Bath-Naylor Funeral Home & Crematory, 522 S. Broadway in Pittsburg, KS. The family will receive their friends from 12 to 1 pm Thursday, June 15, 2017 at the funeral home. Memorial services will be 1 pm Thursday, at the funeral home with the Rev. Donnie Talent, officiating. A memorial has been established to Four Paws in care of the funeral home. Condolences for the family may be left at our web site www.bathnaylor.com.

The family of Marie Celine Brinkman created this Life Tributes page to make it easy to share your memories.

Send flowers to the Brinkman family.