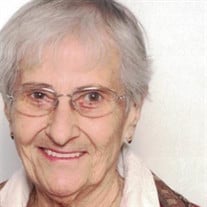 Marcella Lee Page 88, of Frontenac, KS died 8:28pm Tuesday March 20, 2018 at the Medicalodge Nursing Home in Frontenac, KS following an illness. Marcella was born September 19, 1929 in Pittsburg, KS the daughter of Leslie Winter and Della Delores (Goldina) Kimmel. Marcella went to High School in San Mateo, CA and later went to Kansas Teacher’s College in Pittsburg, KS. On April 6, 1952 Marcella married Frank Warren Page in Pittsburg, KS; he survives at the home. In their early married years Marcella and Frank lived in Denison, KS north of Topeka for about 5 years. They finally settled in Frontenac, KS in 1959. Marcella worked as a book-keeper and receptionist for stores in Pittsburg, KS including Comptons and Foodtown. Marcella was a member of the Frontenac United Methodist Church; a member of the OES; American Legion Auxillary; Mother Advisor for the Rainbows; she was known to love to fish; camping; sewing; was known to help her family during harvest time; was known as the “laundry expert” and most of all had a deep love for her kids and grandkids. Survivors include her husband; children Les Page and wife Janie of Louisburg, KS, Verna Ashcraft and husband Ken of Raytown, MO and Karen Riffey and husband Charles of Sawyer, KS; grandchildren Tony Page, Patrick Page, Kevin Ashcraft, Ryan Ashcraft, Mike Ashcraft, Brandon Riffey, Angela Riffey-Storey, Erin Riffey and Cherie Riffey; 16 great-grandchildren and numerous nieces and nephews. Marcella was preceded in death by her parents, brother Jacob Kimmel, grandson Charlie Riffey and infant grandson Jeff Page. Graveside Services will be 12:30pm Friday March 30, 2018 at the Ft. Scott National Cemetery in Ft. Scott, KS with Pastor Annie Ricker officiating. In lieu of flowers the family asks expressions of sympathy to be in the form of memorials to the Girard Medical Center. Friends may drop off or mail memorials to the Bath-Naylor Funeral Home 522 S. Broadway Pittsburg, KS 66762. Condolences may be left at www.bathnaylor.com. Arrangements and services are under the direction of Bath-Naylor Funeral Home of Pittsburg, KS.

The family of Marcella Lee Page created this Life Tributes page to make it easy to share your memories.

Send flowers to the Page family.