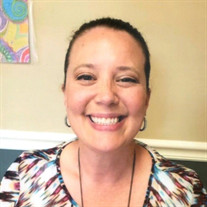 Mandy Marie Armstrong Karstetter, 44 of McCune, KS died December 14, 2020 as a result of an auto accident. She was born December 28, 1975 the daughter of Steven Armstrong and Karen (Hoffman) Perry. On March 2, 2007 she was united in marriage to Rick Karstetter in Las Vegas, NV; he survives of the home. Mandy was an LPN. She was currently employed at the Oswego Heath & Rehab as an Infectious Control Nurse. She was a member of the Zion Lutheran Church in Pittsburg. Additional memberships include American Association of Nurses and the Labette County Emergency Task Force and she was appointed to the Kansas State Board of Nursing. Additional survivors include her four children Christine Paige Williamson of Pittsburg, KS, James Edward Zimmerman, Jr. of Weir, KS, Beau William Hunter Zimmerman of Pittsburg and Coston Avery Karstetter of Oswego; KS; Parents: Steven and Susie Armstrong of Pittsburg and Karen Perry of Pittsburg, five siblings: David Ferguson of Girard, KS, Brandy Merritt of Greenville, SC, Casey Vanzant of Columbus, KS, Brooke Perry of Olathe, KS and Zac Perry of Lawrence, KS; paternal grandmother Carrie Smith of Tulsa OK, grandchildren: Kash Steven Dean Zimmerman, Asher Blake Milton, Jackson James Zimmerman and Henley Rae Zimmerman. She was preceded in death by her sisters Kanah Armstrong-Martin and Kimberly Spurling; maternal grandparents Jack & Hilma Hoffman. Funeral services will be 11am Tuesday, December 22, 2020 at the Bath-Naylor Funeral Home with Aaron Williams officiating. Burial will follow in the Zion Lutheran Cemetery. A visitation will be from 9am Monday until 8pm where the family will receive friends from 6pm – 8pm. Due to covid the service will also be live-streamed and will be accessible under the obituary starting at 11:00am.

Mandy Marie Armstrong Karstetter, 44 of McCune, KS died December 14, 2020 as a result of an auto accident. She was born December 28, 1975 the daughter of Steven Armstrong and Karen (Hoffman) Perry. On March 2, 2007 she was united in marriage... View Obituary & Service Information

The family of Mandy Marie Karstetter created this Life Tributes page to make it easy to share your memories.

Send flowers to the Karstetter family.