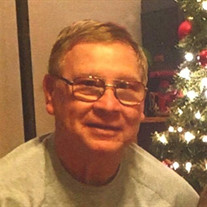 Lou "Mack" Farmer, 73 of Girard, KS died at 4:20 pm, March 30, 2019 at the Ascension Via Christi Hospital in Pittsburg. He was born December 4, 1945 in Ft. Scott, KS the son of Arthur C. and Edwinna (Clunch) Farmer. Mack graduated from the Ft Scott High School with the class of 1964. He entered the U.S. Army with the 1st Battalion, 72nd Armor and was stationed at Camp Rose Korea from 1966-1968. On March 27, 1970 he was united in marriage to Kathy Johnson in Ft. Scott, KS. She survives him of the home. Upon returning home from Korea he attended Kansas State Teachers College now known as PSU, graduating in 1973. In the summer of 1971 Mack worked for KS Historical Society, excavating footings for the old buildings at Fort Scott. In 1973 he was hired as the first Adult Probations Officer of Bourbon County KS, where he helped write the grant for the funding of the program. In 1975, he was hired as Probation and Parole Officer with KS Department of Corrections in Great Bend, KS; then in 1978 he transferred to Pittsburg, KS as Regional Director for the Southeast Kansas Region. Mack retired in 2002. Mack was also an avid fisherman and bowler. Additional survivors include a daughter Deana Cubie and her husband Alex, and a grandson Collin Cubie, all of Topeka; KS, a sister-in-law Elaine Johnson of Tucson, AZ, a brother-in-law Ken Johnson and wife Joyce of Fort Scott, KS. Along with many nieces, nephews, great and great-great nieces and nephews. He was preceded in death by his parents, two brothers: Arthur Farmer, Jr. & Michael Farmer and a nephew Timothy Farmer. A celebration of Life Service will be 2pm, Wednesday April 3, 2019 at the Farlington Lake Shelter House with Dr. David Beaty officiating. Condolences may be left at www.bathnaylor.com. Memorials may be made to the SEK Humane Society; these may be left at or mailed to the funeral home. Services are under the direction of the Bath-Naylor Funeral Home 522 S. Broadway Pittsburg, KS.

The family of Mack Farmer created this Life Tributes page to make it easy to share your memories.

Send flowers to the Farmer family.