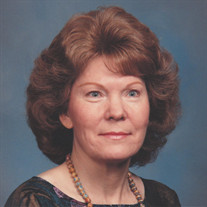 Lucille Sanders, 86, died March 1, 2017 in Shawnee, Kan. Lucille was born on May 3, 1930 in Picher, Okla. to Charles and Faye Prince. She grew up in Pittsburg, Kan. and in 1952 she married her Navy sweetheart, Billie Lee Sanders. As a naval wife, she lived in Norfolk, Va., and San Diego, Calif. After retiring from the Navy, the family returned to the Midwest in 1966 and moved to Joplin, Mo. where she later graduated from Joplin Business College in 1975. Along with following the activities of her children and grandchildren, Lucille was very active in the church community helping lead many people to the Lord. She was a member of Central Assembly and Forest Park Baptist Church in Joplin, Mo. and later became a member of Lighthouse Tabernacle in Pittsburg, Kan. She was preceded in death by her parents, Charles Melvin Prince and Christina Faye Hendrix Prince, siblings, Charles Prince, Jr., Nellie Prince (infant), Lawrence Prince, Margaret (Connie) Pauly, Wilma Bullion, Glen Prince, and ex-husband, Bill Sanders. She is survived by her son, Greg Sanders (Evelyn) of Raymore, Mo. and daughter, Lea Morrison (Bob) of Parkville, Mo.; brothers, Floyd Prince, Shawnee, Kan., Jerry Prince (Bonnie), Basehor, Kan., and Danny Prince, Pittsburg; grandchildren, Ryan Sanders, Tara Graves (Danny), Audrey Derrick, Kurt Morrison (Amelia); great-grandchildren, Carsen VanCamp, Olivia VanCamp, Rylee Graves, Nyla Graves, Fisher Derrick and many nieces and nephews. Services will be at 11am, Saturday, March 4, 2017 at Bath-Naylor Funeral Home, Pittsburg, Kan. with Pastor Howie Nunnelly officiating. Interment will follow at Englevale Cemetery in Fairview, Kan. Family will receive friends at the funeral home on Saturday morning from 10 am until service time. In memory of Lucille, donations can be made to Impact Life Church in Joplin, MO or a charity of your choice. Services by the Bath-Naylor Funeral Home of Pittsburg, www.bathnaylor.com.

Lucille Sanders, 86, died March 1, 2017 in Shawnee, Kan. Lucille was born on May 3, 1930 in Picher, Okla. to Charles and Faye Prince. She grew up in Pittsburg, Kan. and in 1952 she married her Navy sweetheart, Billie Lee Sanders. As a naval... View Obituary & Service Information

The family of Lucille Sanders created this Life Tributes page to make it easy to share your memories.

Send flowers to the Sanders family.