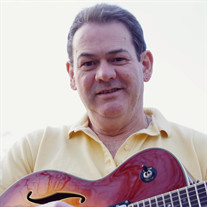 Louis Edward “Lou” Davidson, 63 of Radley, KS passed away at 1:15 pm Friday, January 6, 2017 at Via Christi Hospital in Pittsburg. He was born October 17, 1953 in Scotia, CA the son of Louis “Blackie” Davidson and Dorothy (Harrington) Davidson. He was an Army Veteran entering in 1974 and was discharged in 1978. He was married to Tonja Brancart; she survives of the home. Lou was a longtime area musician where he performed with many bands. He was a skilled multi instrumentalist, singer, songwriter, studio engineer and piano tuner. He recorded two self-titled albums that he played, sang and produced himself. He was also an avid wine maker and photographer. Additional survivors include his mother Dorothy of Galena, KS, two brothers: George Davidson of Neosho, MO and Joe Davidson of Joplin, MO a sister Marla Arcadi of Freemont, CA, a nephew C.B. (Andrea) Davidson of Cedar Park, TX and a niece Anna Davidson of Napa, ID; a special daughter Brandie (Jason) Dennis and their children Abigail, Jackson, Charlotte and Liberty; several aunts and cousins and a longtime friend and collaborator Peter Kirch of Monett, MO. He was preceded in death by his father and a brother William Davidson. Memorial services will be 2 pm, Thursday, January 12, 2017 at the Friskel Funeral Home in Frontenac with Pastor Thomas Wehrman officiating. The family will receive friends at the funeral home one hour before service time. In lieu of flowers the family asks expressions of sympathy to be in the form of memorials to the Learning Tree at Greenbush. Condolences may be left at www.friskelfuneralhome.com. Services and arrangements are under the direction of the Friskel Funeral Home 230 E. McKay Frontenac, KS.

The family of Louis Edward "Lou" Davidson created this Life Tributes page to make it easy to share your memories.

Send flowers to the Davidson family.