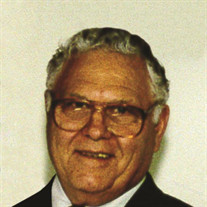 On Sunday September 13, 2020 Louis Lavern “Cas” Casaletto, of Frontenac, loving husband and father peacefully passed away at Ascension Via Christi Hospital at the age of 93. Louis was born on June 6, 1927 in Arma, Kansas to Joe and Alice (Rons) Casaletto. On June 10, 1951 he married Louise Ossana at the Arma Methodist Church. They raised three children. Louis and Louise would have celebrated 70 years of marriage in June of 2021. Louis was a veteran serving in the Merchant Marines from 1945-1947. He returned home from service to help with running the family business; Inter-Urban Lumber Company in Arma, Kansas. In 1972 the business was relocated as True Value Home Center in Pittsburg, Kansas. Louis was very active in civic projects; including being instrumental in the development of the Miner’s Memorial in Immigrant Park of Pittsburg. He felt strongly that the coal miners of this area should be recognized. One of his proudest accomplishments was making possible the formation of the Wilderness Park, through the donation of the land by Louis and Louise. The park was dedicated in 2000 to the preservation of wildlife and the enjoyment of all. Louis was preceded in death by his father Joe, mother Alice and brother Art. He is survived by his wife Louise of the home; son David Casaletto (Diane) of Galena, MO; daughters Bonnie Warlop (Bill) of Frontenac, KS; Mary Sue Painter (Micky) of Frontenac, KS.; eight grandchildren : Angela, Sarah, Kristin, Casey, Daniel, Heidi, Katie, and Abby and five great grandchildren: Madison, Payton, Arlo, Olive, and J.W. Cremation is planned with a private family Celebration of Life at a later date. The family suggests in lieu of flowers donations may be made in his name to SEK Humane Society or Pittsburg Public Library. Arrangements by the Bath-Naylor Funeral Home. Condolences may be left at our web site www.bathnaylor.com

On Sunday September 13, 2020 Louis Lavern &#8220;Cas&#8221; Casaletto, of Frontenac, loving husband and father peacefully passed away at Ascension Via Christi Hospital at the age of 93. Louis was born on June 6, 1927 in Arma, Kansas to Joe... View Obituary & Service Information

The family of Mr. Louis L Casaletto created this Life Tributes page to make it easy to share your memories.

Send flowers to the Casaletto family.