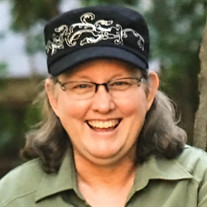 Lori is with the Lord. Lori Ann Southern was born September 10, 1964 in the county of Clay Center in Kansas. She was with her family and the good people of Palmer, KS until the age of 9. The family moved to Alma, KS and the good people there. Then they moved to Leavenworth, KS in 1981. All the moves were following her dad’s call to teach/principal in Lutheran Schools. Following a graduation from High School in Leavenworth, KS, Lori came to Pittsburg State University and graduated there in 1986. While attending Pitt State she met Steve Southern, the great love of her life. They were married in 1985 at the Zion Lutheran Church of Pittsburg, KS. He survives of the home. They were looking forward to a 33 year anniversary in June of this year. From that union two children were born. Jodie Lynn Tirawi (Dan) and Clayton Thomas Southern. No grandchildren, but many nieces & nephews. Additional survivors include her parents, Leland and Della Pitsch of Fort Smtih, AR; brother, Mat Pitsch (Seanna) of Ft Smith AR and their four children; brother, Monte (Marta) and their three children of Concordia, MO; and brother, Troy(Nelly) of Oberlin, KS. Lori’s in-laws, Floyd & Althea Southern of Pittsburg, KS; brother-in – law, Mike Southern (Kim) and their daughter of Carl Junction, MO. Lori worked for USD 250 for 13 years and was a USD Globe award winner. Then she worked for Crawford County for the last 8 years. Lori was an avid quilter. Some of which will be displayed during the service. She also enjoyed singing in her church choir. There will be music to celebrate being with the Lord. Lori was a follower of her children’s interest and activities and loved every moment of that time. A Celebration of Life Service will be held Friday, 2:00 PM, April 13, 2018 at the Pittsburg Presbyterian Church located on 5th and Pine of Pittsburg, KS under the direction of Pastor KO NooNoo. A visitation will follow the service from 3-4 PM. Burial will follow at Weaver Cemetery in Oronogo, MO. In lieu of flowers the family asks expressions of sympathy to be in the form of memorials to the Pittsburg Presbyterian Church Scholarship Fund, or to your local food bank. Condolences may be left at www.bathnaylor.com. Arrangements and services are under the direction of Bath-Naylor Funeral Home of Pittsburg, KS.

Lori is with the Lord. Lori Ann Southern was born September 10, 1964 in the county of Clay Center in Kansas. She was with her family and the good people of Palmer, KS until the age of 9. The family moved to Alma, KS and the good people there.... View Obituary & Service Information

The family of Lori Ann Southern created this Life Tributes page to make it easy to share your memories.

Lori is with the Lord.
Lori Ann Southern was born September...

Send flowers to the Southern family.