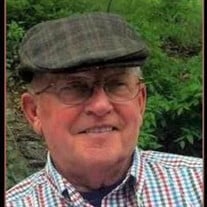 Lloyd “Gene” Baldwin, 80, went to be with his Savior on Sunday, September 5th, at Via Christi hospital after a short battle with COVID. Gene was born February 26, 1941, in Fort Scott, KS, to William and Helen (Denny) Baldwin. He graduated from Frontenac High School in 1958 and enlisted in the Air Force in 1959. He served in Germany, Thailand, and Biloxi, MS, before being honorably discharged in 1967 as a Staff Sergeant. Gene worked for 32 years with Pittsburg cable television, retiring under Cox Media. Post retirement Gene volunteered extensively with Habitat for Humanity of Southeast Kansas and Meals on Wheels, as well as being a dedicated servant to his church and an avid gardener. He met Gloria Jean Vineyard during the beginning of his career. They were married on August 30, 1975, at Trinity Baptist Church, in Pittsburg, KS. Gloria survives of the home. Preceding him in death were his parents, a sister Ruth Prater, and brother-in-law Nick Carrington. He is survived by his children Kris (Jenn) of Joplin, MO, Betsy (Ben) Rice of Cherokee, KS , Stephanie Baldwin of Pittsburg, as well as 4 grandchildren. He also is survived by his sister Mary Carrington of Pittsburg and brother Carl (Cheryl) of Houston, Texas, brother-in-law Joe Prater of Joplin, MO, as well as numerous nieces, nephews, and extended family members. At this time, services are pending due to COVID. He will be laid to rest at a later date at the Fort Scott National Cemetery. In lieu of flowers, the family requests donations to Habitat of Humanity of Southeast Kansas or Meals on Wheels.

The family of Lloyd Gene Baldwin created this Life Tributes page to make it easy to share your memories.

Send flowers to the Baldwin family.