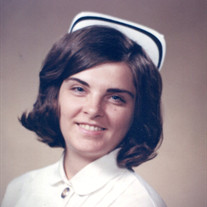 Linda Kay (Spangler) Baker was born in Pittsburg, KS on January 10th 1948. To the parents of Lawrence Spangler and Kay Ruth Meyers Spangler. Shortly after her birth, they separated. Anne Madea Spangler took over the role of mother and they had a loving relationship. Shortly, before Linda became married, she reunited with her birth mother and formed a long, lasting relationship. Linda attended St. Mary’s Colgan and graduated in 1967. She later graduated from Mt. Carmel School of Nursing. During her last year of nursing school, she entered into the Army Student Nurse Program. Following graduation, she went into active duty with the Army Nurse Corp. She remained active in the Army Reserve. In 1972, she married Harvey Baker and they remained on active duty together. They developed a nomadic lifestyle together. Harvey’s assignments included numerous assignments across Alaska with medical health services. They had two children together, Harvey William Baker of Colorado and Rebecca Suzanne Baker of Pittsburg. Four grandchildren Kaylyn and Kyle Baker of Eldorado, KS, Scotty Baker of Wichita, KS and Zachary Baker of Pittsburg, KS; two brothers Danny Spangler of Ft. Worth, TX and Johnny Spangler of Pittsburg, KS; in addition Harvey’s brother, Randy Marietta of Frontenac, KS which she adopted and cared for deeply. After returning to southeast Kansas in 1996, Harvey and Linda took on the hobby of renovating a century-year-old farmhouse for 20 years. She will be greatly missed by so many as she was widely known for her kind, loving, and friendly hospitality, and beauty in every way. She knew no stranger and ensured everyone felt welcomed. “She is in good hands, as long as no one in heaven sits on her right side.” Rest in Peace George. A Celebration of Life will be 10:00am Friday March 12, 2021 at the Bath-Naylor Funeral Home in Pittsburg, KS with Chaplain Adah Hutchcraft officiating. Burial will take place at a later date at Ft. Scott National Cemetery in Ft. Scott, KS. In lieu of flowers the family asks expressions of sympathy to be in the form of memorial to the American Heart Association. Friends may drop off or mail memorials to Bath-Naylor Funeral Home 522 S. Broadway Pittsburg, KS 66762. Condolences may be left at www.bathnaylor.com. Arrangements and services are under the direction of Bath-Naylor Funeral Home of Pittsburg, KS.

Linda Kay (Spangler) Baker was born in Pittsburg, KS on January 10th 1948. To the parents of Lawrence Spangler and Kay Ruth Meyers Spangler. Shortly after her birth, they separated. Anne Madea Spangler took over the role of mother and they had... View Obituary & Service Information

The family of Linda Kay Baker created this Life Tributes page to make it easy to share your memories.

Send flowers to the Baker family.