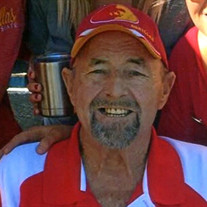 Leonard (Lenny) J. Miller 76, of Riverside, MO died 3:40am Tuesday January 31, 2017 at his home following an illness. Lenny was born July 9, 1940 in Pittsburg, KS the son of Nicholas T. and Esta M. (Humphreys) Miller. Lenny attended area schools and was a graduate of Cherokee High School. He later attended and graduated from Pittsburg State University in 1963 and was active in ROTC. He also was on the Pittsburg State Football team from 1959-1960. Following graduation Lenny joined the Navy serving his country during Vietnam as a P3 Pilot Commander and a submarine hunter in the Mediterranean. He earned the rank of Liutenant. After his military service he became a pilot for TWA attaining the rank of captain for 30 years. On July 28, 1989 Lenny married Judy A Billington in Weir, KS; she survives at the home. Lenny was a member of the Sacred Heart Catholic Church in Tonganoxie, KS; was known as an avid golfer, hunter, fisherman, PSU Football Fan, Royals Baseball Fan and Chiefs Fan. Survivors include his wife; sister-in-laws Martha Miller of Bristow, OK, Marie Miller of Pittsburg, KS and Carol Billington Hess of Pflugerville, TX; many loving nieces, nephews, great nieces and great-nephews. Lenny was preceded in death by his parents, siblings Margaret Dealy, Marylyn Martin, Harold Miller, Donald Miller, Arnold Miller, Raymond Miller, Tom Miller and Lawrence (Butch) Miller. Mass of Christian Burial will be 10:00am Saturday February 4, 2017 at the Our Lady of Lourdes Catholic Church with Fr. Mark Goldasich as celebrant. Burial will follow at the Garden of Memories Cemetery in Pittsburg, KS. Family and friends will recite the rosary at 7:00pm Friday February 3, 2017 at the Bath-Naylor Funeral Home in Pittsburg, KS; family will receive friends following the rosary. In lieu of flowers the family asks expressions of sympathy to be in the form of memorials to the Sacred Heart Catholic Church Building Fund. Friends may drop off or mail memorials to the Bath-Naylor Funeral Home 522 S. Broadway Pittsburg, KS. E-mail condolences may be left at www.bathnaylor.com.

The family of Leonard J. Miller created this Life Tributes page to make it easy to share your memories.

Send flowers to the Miller family.