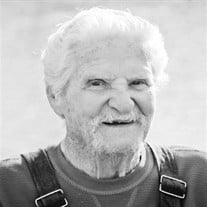 Leonard Berry Cain, 96, of Columbus, KS, gained his wings on November 13th, 2019, at his home. Leonard was born October 14, 1923. He was born in Stippville, KS to Charles and Lydia Cain. Leonard had 2 brothers and 2 sister. At the age of 19 he was drafted, he served in the U.S. Army Tank Corps from 1943 -1945. He was stationed through Europe and into Germany. During his time in the war he began as a driver and ended as a tank commander. Leonard was awarded battle stars, Unit Citation, Croix de Guerr, and a good conduct medal. Once he returned from the war he met his wife, Dolores May Spriggs. They were married on December 24, 1946. Leonard and Dolores had one child, Berry Jack Cain. He was employed for Scovall Plumping after returning from the war and later worked for Columbus High School, as Head of Maintenance, until he retired. Leonard’s talents were many, he was skilled at carpentry, electrical, and pretty much any work with his hands. He enjoyed sharing his skills with his son and grandsons. In his younger years, he enjoyed, camping, riding motorcycles, and spending time with his family. As the years past Leonard spent a lot of his time with grandchildren and later his great grandchildren. He was proceeded in death by his parents, brothers and sisters, Loving wife Delores, and Great Grandchild Lillian Cain. He is survived by his son, 3 grandsons, and 10 great grandchildren. Son, Berry Cain and his wife Cheryl, Grandson; Jake Cain and his wife Jessi, Grandson; Jon Cain and his wife Amanda, Grandson; Shane Webb and his wife Marie, 10 Great Grandchildren; Piper Cain, Jaxon Cain, Jayden Cain, Hanna Cain, Annalea Cain, Elizabeth Cain, Elijah Cain, Matthew Webb, Lexie Webb, and Shalynne Webb. Leonard was loved by all and will missed by so many. Funeral Services will be at 11 am Saturday, November 16, 2019 at the Bath-Naylor Funeral Home 611 S. East Ave Columbus, Kansas with Pastor Gary Yurk officiating. Family will receive friends at 10 am prior to the service at the Bath-Naylor Funeral Home. Burial will follow in the Columbus Park Cemetery. Arrangements are under the direction of Bath-Naylor Funeral Home of Columbus.

The family of Leonard Berry Cain created this Life Tributes page to make it easy to share your memories.

Send flowers to the Cain family.