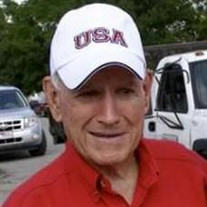 Leon B. Blake, 88, of Scammon, passed away Tuesday, September 25, 2018 at his home. He was born March 7, 1930 in Joplin, Missouri to Sherman and Lizzie (Pilgrim) Blake. He graduated from West Mineral High School in 1949. He served in the United States Army from 1949-1953. On June 15, 1952 he married Gwenith Carlson at the Immaculate Conception Catholic Church in West Mineral, Kansas. Leon worked for P&M Coal Company which included operating Big Brutus and Clemons Coal Company as a dragline operator for a total of 30 years. He was a member of the United Mine Workers Of America Local 14. He also did much soil conservation work around the area with Burgan and Blake Construction where he taught his sons to operate heavy equipment. He was a member of St. Bridget's Catholic Church in Scammon, Kansas. Leon's family was the most important part of his life. He was always a hard worker and it was impossible to get him to slow down. He loved working in the Coal Mines and running heavy equipment. Leon enjoyed fishing and hunting squirrels, deer, and rabbit all of his life with his family and friends. He loved watching his grandchildren at their school functions and especially their sporting events. He also loved following Pittsburg State University football. He was one of their biggest fans. Leon was the type of person who loved everyone and he never met a stranger. He always had a smile on his face and it was guaranteed he would have a funny story or joke to tell. He is proceeded in death by his parents and his Foster parents Vernal and Ruth Smith. Infant daughters, Patricia and Susan. Brothers, Leonard and Lee Roy Blake and Charles Jarmin. In addition to his wife, he is survived by a Foster brother, Raymond Smith and wife Betty of Rural McCune, Ks. His children, Tim Blake and wife Lela of LaCygne, Ks, Mark Blake and wife Lisa of Paola, Ks, Greg Blake and wife Penny of Louisburg, Ks, John Blake of the home, Julie Callender and husband Brent of Joplin, Mo, and Jeff Blake of the home. 14 Grandchildren and 4 Great-Grandchildren. A memorial Mass will be held 11 a.m Saturday, October 6, at St. Bridget's Catholic Church in Scammon, Ks. A Rosary will be recited at 10:30 a.m. at the church prior to the Mass. Condolences may be left at www.bath-naylor.com Cremation arrangements are by Bath-Naylor Funeral Home of Columbus.

Leon B. Blake, 88, of Scammon, passed away Tuesday, September 25, 2018 at his home. He was born March 7, 1930 in Joplin, Missouri to Sherman and Lizzie (Pilgrim) Blake. He graduated from West Mineral High School in 1949. He served in the United... View Obituary & Service Information

The family of Leon B. Blake created this Life Tributes page to make it easy to share your memories.

Leon B. Blake, 88, of Scammon, passed away Tuesday, September...

Send flowers to the Blake family.