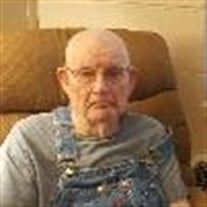 Lavern Delbert Fisher, 95 of Pittsburg, KS formerly of West Mineral, KS died on Tuesday, September 24, 2019 at Medicalodges in Pittsburg, KS. He was born March 26, 1924 in Cherokee County, Kansas the son of Lorenzo and Sarah (Harriman) Fisher. He served in the United States Army during WWII and worked on the assembly line at General Motors for 28 years. On August 1, 1943 he was united in marriage to Leona Margaret Thornburg in Pittsburg, KS; she preceded him in death on March 1, 2016. He was a longtime member of the Community of Christ Church in Scammon, KS. Additional survivors include three sons: Paul Fisher of Scammon, KS, Lloyd Fisher of Liberty, MO and Larry (Mary) Fisher of Odessa, MO; two daughters: Linda (Gary) Shelton of Reynoldsburg, OH and Sarah (Lijian) Yu of Gaithersburg, MD; along with five grandchildren, four great-grandchildren and two great-great grandchildren. He was preceded in death by his parents, wife, five sisters; Ollie, Rosie, Glessie, Vernetta, Nellie and two brothers; Raymond and Irvin. Funeral services will be 2pm, Tuesday, October 1, 2019 at the Bath-Naylor Funeral Home in Weir, KS with Elder Larry Reynolds and Elder Bob Casino officiating. Burial will follow in the Crocker Cemetery. Family will receive friends prior to the service at the funeral home from 1-2pm. Condolences may be left at www.bathnaylor.com. Services are under the direction of the Bath-Naylor Funeral Home of Weir.

The family of Lavern Delbert Fisher created this Life Tributes page to make it easy to share your memories.

Send flowers to the Fisher family.