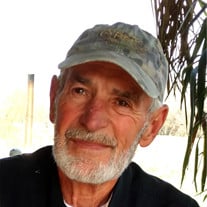 Larry Keith Brisbin, Sr., 77 of rural McCune, KS died suddenly, December 22, 2018 at the Via Christi Hospital in Pittsburg, KS He was born September 22, 1941 in Cherokee, KS the son of John Emerson and Ivy Julia (Newport) Brisbin. Larry was a machinist by trade and worked several places where he usually rose to a management position very quickly. His latest employment was with Midwest Tool in Joplin. He was a member of the Lighthouse Tabernacle in Pittsburg. Larry loved and cared for his family. He especially enjoyed spending time with his grandkids. Survivors include three sons: Jonathan Lee Brisbin of Webb City, MO, Clinton Louis Brisbin of Pittsburg and Steven Watson of Roseland, KS; four daughters: Terri Sue Garrison of Independence, MO, Stephanie Best of Parsons, KS, Stacy Gerstler of Webb City, MO and a honorary daughter, Angela Gatton of Parsons, KS and granddaughter Adyson Gatton; a special friend and companion Linda Morris of the home, a sister Mary Watson of Joplin, MO; 25 grandchildren, 16 great grandchildren. He was preceded in death by his parents, a son Larry K. Brisbin, Jr., seven brothers and three sisters. Memorial services will be 2 pm, Friday December 28, 2018 at the Bath-Naylor Funeral Home with Rev. Daryl Gaddy officiating. Inurnment will be at the Cherokee City Cemetery at a later date. Condolences may be left at www.bathnaylor.com. Memorials may be made to the Larry K. Brisbin, Sr. Memorial Fund to help with final expenses; these may be left at or mailed to the funeral home. Services are under the direction of the Bath-Naylor Funeral Home 522 S. Broadway, Pittsburg, KS 66762.

The family of Larry Keith Brisbin Sr. created this Life Tributes page to make it easy to share your memories.

Send flowers to the Brisbin family.