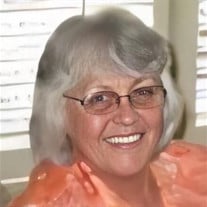 Lana Kay Alexander, 72, of Weir, KS, passed away at 5:27 a.m., on February 16, 2020, at her home with her loving husband and family by her side. Lana was born July 11, 1947, in Pittsburg, KS, the daughter of Robert (Bob) and Eugenia (Jeannie) Brackney. Lana attended Weir Schools and Southeast High School. where she met, and fell in love with Joseph Milton Alexander of Opolis. On September 29, 1962, they were united in marriage at the Weir United Methodist Church where they remained members. Lana, Milt, and their five children moved all over the United States with Milt’s job. She and Milt loved to travel having visited Turkey, Israel, Puerto Rico, Canada and a host of other countries. She also loved photography, fishing, working in her yard and her animals, but her biggest enjoyment was spending time with her children, grandchildren and family. In addition to her husband, she is survived by two sons, Matthew Alexander (Claudia Pierce) of Alexander, ND and Mark (Stella) Alexander of Marshall, TX. Two daughters, Bobbie A. Bell of Birmingham, AL and Shauna (Andy) Akers of Houston, TX. Seven grandchildren, Nicole (Phillip) Alexander-King, Hunter (Kayla) Burgess, Kory Alexander, Courtney (Brad) Jones, Joshua Alexander, Maddison Alexander and Grace Alexander. Three great grandchildren, Alli and Corbin Burgess and Kennedy Jones. A sister-inlaw, Joan Wydick, brother-in-law, Don Alexander, along with many special nieces, nephews and cousins. She is preceded in death by her first-born, curly-haired beautiful daughter, Carla Sue Alexander, her wonderful parents and her big brother, Robert (Mike) Brackney. A “Celebration of Life” will take place at the Weir Civic Center on Tuesday, February 18, 2020, 2:00 PM with burial at Blackjack Cemetery immediately following. The family suggests memorials to the Weir United Methodist Church, The Gideon’s or St. Jude’s Hospital. These may be left at or mailed to Bath-Naylor, 104 W. Main Street, Weir, KS 66781. Friends may leave condolences online at www.bath-naylor.com. Arrangements are under the direction of the Bath-Naylor Funeral Home, Weir, KS.

The family of Lana Kay Alexander created this Life Tributes page to make it easy to share your memories.

Send flowers to the Alexander family.