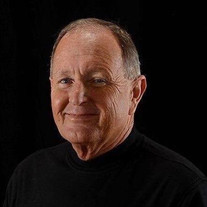 Kevin A. Krumsick, 62, of Spring Hill, KS, formerly of Frontenac, KS passed away at 12:43 a.m. Monday, March 13, 2017, surrounded by his family at St. Luke’s Medical Center in Kansas City, MO. Kevin was born on December 22, 1954, in Frontenac, KS, to Bob and Regina Hutsey Krumsick. He graduated from Frontenac High School with the class of 1973. On December 21, 1974, he was united in marriage to Geri Gessler by Father Eugene Gerber now known as Bishop Emeritus Eugene Gerber, at Blessed Sacrament Catholic Church in Wichita, KS. Kevin was employed with various electrical contractors in the Wichita area until 1986, when he went to work for Swift Eckridge in Kansas City, KS. In 1998, he worked for Fagen, Inc. at the Jayhawk Chemical Plant then later entered the renewable energy field traveling to construction projects building ethanol plants. In 2009, he accepted a position as Project Manager for Blattner Energy overseeing the construction of wind farms in the Minco, OK area. Recent employment was with CRB Builders in Kansas City, MO, where he worked until being diagnosed with pancreatic cancer in July, 2015. Kevin was an avid Harley rider including trips to Sturgis, Colorado, Florida, and many more too numerous to list. His newest interests were RV camping and jet skiing. Kevin’s love of family was constantly motivating him to plan family gatherings including yearly trips to Table Rock Lake in Branson. In October 2014, Kevin and Geri built their present home in Spring Hill, KS. They are current founding members of the newly established St. John Paul II Catholic Church in Olathe, KS. Kevin is survived by his wife, Geri and their five children. Greg Krumsick (Melanie), Robin Sharp (Aaron), Andy Krumsick (Jennifer), Bobby Krumsick (Sarah) and Zach Krumsick (Rachel). Additional survivors include seven grandchildren. Kelsey and Avery Krumsick, Alec and Jacob Sharp, Betsy Krumsick, Annie and Ellie Krumsick, as well as his beloved canines Sydney, Sheila and several Granddogs. He is also survived by his five siblings. Kay Gobl (Joe), Kelly Krumsick, Karen Gorentz (Bob), Kenny Krumsick, and Kurt Krumsick (Sandi). Kevin was preceded in death by his parents. Mass of Christian burial will be celebrated at 10:30 am, Thursday, March 16, 2017 at the Sacred Heart Catholic Church in Frontenac, KS with Father Thomas Stroot, Father Andrew Strobl and Deacon Don Geesler as celebrants. Music for the mass is by Stephen Butler. The lector for the mass will be Bill Gessler. Pallbearers will be Jim Welsh, Ben Hardin, Chuck Gessler, John Gessler, Kolter Krumsick and Bill Beasley. Burial will follow at Mount Carmel Cemetery in Frontenac. The parish rosary will be recited at 6:30 pm, Wednesday, March 15, 2017 at the Friskel Funeral Home, 230 E. McKay in Frontenac, KS. The family will receive friends following the rosary at the funeral home. In lieu of flowers, the family requests memorials to the St. John Paul II Catholic Church Building Fund or the Mount Carmel Cemetery Fund which can be brought by or mailed to Friskel Funeral Home 230 E. McKay Frontenac, KS 66763. Arrangements are under the direction of Friskel Funeral Home, Frontenac. The family can be reached at the Krumsick home at 112 N. Linn in Frontenac. Condolences may be left at our web site www.friskelfuneralhome.com.

The family of Kevin A. Krumsick created this Life Tributes page to make it easy to share your memories.

Send flowers to the Krumsick family.