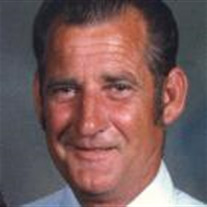 Kenneth G. "Bodie" Burton, age 72, Opolis, Kansas joined his beloved Patsy at 5:35 a.m. Friday, April 15, 2016 at his home. Kenneth was born in Panama, Oklahoma on April 24, 1943 to Lou Allen and Winnie (Cato) Burton. He attended Panama Schools and on October 17, 1959 married Patsy Ann Myers. She preceded him in death on June 11, 2005. He was employed for many years in the Construction industry and was co-owner with his son, Gary, of B&B Metal Fabrication in Opolis where he worked until retirement. Bodie was an avid outdoorsman and family man spending much of his spare time hunting, fishing, and gardening. He also amassed a large antique Minneapolis Moline tractor collection, collected antique Lionel trains, and many other antiques. During his life, he also went on several hunting expeditions from Canada to Alaska. Additionally, Kenneth was one of the founders of the Baker Township Volunteer Fire Department and served on the Board of the Maggie Grebe Memorial Park in Opolis, Kansas. He is survived by two sons, Kenneth J. Burton, Gary Burton and his wife Melinda both of Opolis, Kansas, one daughter Julie Dellasega and husband Doug of Pittsburg, 6 grandchildren Dakota, Sydney, and Delaney Burton, Andrew, Caleb and his wife Marlene, and Jonah Dellasega. Surviving siblings include one brother, Haskell Burton of Pittsburg, three sisters, Ailene Stewart, Kathern Crase of Spiro, Oklahoma, and Louise Robertson of Fort Smith, Arkansas. He was preceded in death by three brothers, Adraith Mourton, Melvin (Sonny), and Allen(Jake) Burton, an infant sister, Barbara, and his parents. Funeral services will be 10 am, Wednesday, April 20, 2016 at the Bath- Naylor Funeral Home in Pittsburg. Burial will follow in the Crocker Cemetery. Family will receive friends at the funeral home Tuesday evening from 6-8pm. Condolences may be left at www.bathnaylor.com. Memorials may be made to the Harry Hynes Memorial Hospice and/or the Alzheimer’s Association; these may be left at or mailed to the funeral home. Services by Bath-Naylor Funeral Home Pittsburg.

The family of Kenneth G. "Brodie" Burton created this Life Tributes page to make it easy to share your memories.

Send flowers to the Burton family.