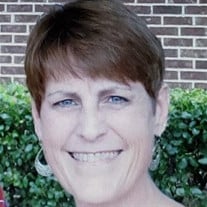 Kelly J. Borden 58, of Pittsburg, KS passed away at 10:12am Tuesday December 31, 2019 at her home from non-small cell lung cancer diagnosed in March 2017, despite having never smoked. She was born on March 12, 1961 in Joplin, MO to Marvin C. and Norma J. (Snyder) Howard. She graduated from Pittsburg High School in 1979 and attended Pittsburg State University. On October 12, 1990 she was united in marriage to Joseph N. Borden at the First Christian Church in Pittsburg, KS. She worked for KDHE Surface Mining Section from 1981 until 1992. She then began working at Pittsburg State University as an Administrative Specialist in the Biology Department where she had worked for the last 27 years. She was a member of and attended Carterville Christian Church. She is survived by her husband, Joe, of the home; brother and sister in law, Mike and Penny Howard of Carl Junction, MO; sister and brother in law, Pam and Scott Heide of Medfield, MA; sister and brother in law, Stacy and Erik Coutu of Pass Christian, MS; mother in laws Julie-Anne Harlan of Farlington, KS and Ruth Sneed of Frontenac, KS; sister in law Debbie Borden of Girard, KS; brother in law and sister in law Billy and Tina Borden of Mindenmines, MO; and brother in law and sister in law Ben and Lou Borden of Girard, KS and thirteen nieces and nephews. She is also survived by numerous aunts, uncles and cousins. She was preceded in death by her mother in April 2013, her father December 2016 and her father in law William Borden in October 2003. Per her wishes, she will be cremated with a private burial in the Girard City Cemetery in Girard, KS. A Celebration of Kelly’s Life will be 6-8:00pm Monday January 6, 2020 at the Heckert-Wells Hall on the campus of Pittsburg State University 1706 S. Joplin Street. In lieu of flowers the family ask expressions of sympathy to be in the form of memorials to St. Jude’s and/or the PSU Nature Reach Program. Arrangements are by Bath-Naylor Funeral Home of Pittsburg, KS.

Kelly J. Borden 58, of Pittsburg, KS passed away at 10:12am Tuesday December 31, 2019 at her home from non-small cell lung cancer diagnosed in March 2017, despite having never smoked. She was born on March 12, 1961 in Joplin, MO to Marvin... View Obituary & Service Information

The family of Kelly J Borden created this Life Tributes page to make it easy to share your memories.

Send flowers to the Borden family.