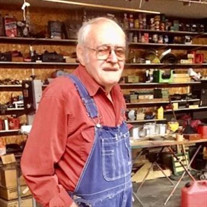 Keith Harvey Spriggs, age 82, of Cherokee, entered eternal life on Sunday, April 19, 2020 from his home where he passed peacefully after a year of declining health. Keith was born on February 3, 1938 to Howard and Mildred (Harvey) Spriggs on the family farm near McCune, Kansas. He was a lifelong resident of southeast Kansas and graduated with the class of 1955 from Cherokee County Rural High School in Columbus. He spent his professional career as an estimator and superintendent in commercial construction, retiring from Deill Construction in Pittsburg. He was a long-time employee of Shields Construction and General Service Corporation in Oswego before returning to Deill, where he finished his career. Keith was a devoted husband and loving father. He nurtured his children through sharing his love of adventure, science, technology, literature, and music throughout their lives. He welcomed their friends into the home and always had a joke or funny story to share. He was a long-time Sunday School teacher of the young adults class at the First Baptist Church in Columbus, where he formed cherished friendships. He was an avid hobbyist with many interests and valued friendships seeded in his love of model airplanes, antique automobiles, auto restoration, and most recently, his craft of building miniature tools and antique furniture. He collected and restored antique Fords, accomplishing two complete restorations of convertibles from the 1950s. He was respected by his peers for his strict attention to detail, causing his chronicles and restoration guides to be published by several journals dedicated to vintage automobiles and airplane modeling. Keith and Deanie enjoyed flea markets and antique stores, and traveling from coast-to-coast and throughout Europe with his children. Keith is survived by his wife of 30 years, Mary Willa Deane “Deanie” (Littlejohn) Spriggs, of the home, his children Lisa Eisele and James Spriggs, from his first marriage to Joanne Chavez Gould, sisters Jean Faucett and Carole Audley, two nieces, Rebecca Bumgarner and Suzanne Borgia, and one nephew, Kevin Henderson. Survivors also include Brian and Allan Tullis, the sons of Deanie, and Cheryl Martin, Kristy Herron, and Terry Peak, the children of his former wife, the late Beverly Capron. From this union, Papa Keith was blessed with grandchildren and great grandchildren that were the light of his life. Keith was predeceased by his parents and one sister, Nondis Burnett. As per Keith’s wishes, there will not be a funeral service. Due to the public health declaration, there will not be a visitation, but his life will be celebrated each day by all who were blessed to know him. Memorials may be left to the Columbus Museum and Genealogy Library, 100 S. Tennessee, Columbus, KS 66725.

Keith Harvey Spriggs, age 82, of Cherokee, entered eternal life on Sunday, April 19, 2020 from his home where he passed peacefully after a year of declining health. Keith was born on February 3, 1938 to Howard and Mildred (Harvey) Spriggs... View Obituary & Service Information

The family of Keith Harvey Spriggs created this Life Tributes page to make it easy to share your memories.

Send flowers to the Spriggs family.