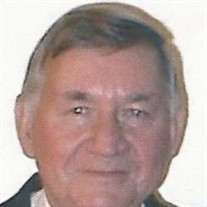 PITTSBURG, KS - Keith E. Beaver, 87, of Pittsburg, KS passed away on February, 10, 2022 at Via Christi Village in Pittsburg, KS. He had been in good health and living independently until he had a stroke in March of 2021, which declined his health. Keith was born June 27, 1934 in Pittsburg, KS to John Troy and Minnie Crystal (Smith) Beaver. Keith had been a Pittsburg resident his entire life. He attend Pittsburg Public Schools and graduated from Pittsburg High School. He was a veteran who served in the Army National Guard. On December 15, 1953, he married the love of his life Marilyn Joann Moore in Mindenmines, MO. Marilyn passed away on March 18, 2017 after 63 years of marriage. Keith worked as a Resident Manager along side his wife at North Joplin Apartments for 27 years, both retiring in 2002. He also worked at Dicky Clays for serval years, as well as several other jobs. He was a hard working man, working two or three jobs to support his family. He was a devoted family man. In his younger years, Keith was an avid fisherman and hunter. He loved watching westerns. He enjoyed sitting on his front porch and being outside just to watch cars drive by, catching a couple of honks from friends, throwing in a wave or two. He enjoyed spending time with his sweetheart Alice and taking her out on dinner dates. He was also an active member of Lighthouse Tabernacle Church of Pittsburg. Survivors include sons, Michael Beaver of Pittsburg, Mark Beaver and his wife Dianna of Weir; Daughter Sherry Chapman and her husband James of Pittsburg; one brother Gary Wayne Beaver of Georgia; one sister Donna Stroud of Denton, TX; five grandchildren; nine great-grandchildren and one great-great-grandchild with three additional expected in the coming months. Also, to be Included, his sweetheart Alice Meek of Pittsburg. He was proceeded in death by parents; his beloved wife Marilyn Joann Beaver; brother Kenneth Beaver; sister Lorene Wire; grandson Nathan “Nonny” Chapman and his beloved dogs Dusty and Buddy. Graveside services will be at 2pm February 22, 2022 at Crocker Cemetery with Rev. Daryl Gaddy officiating. Reception will follow from 4pm to 6pm at the Frisco Event Center in Pittsburg. Memorial contributions may be made in his memory to the Alzheimer’s Association, in care of the funeral home. Arrangements are by the Bath-Naylor Funeral Home, 522 S. Broadway in Pittsburg, KS. Condolences may be left at our website www.bathnaylor.com

PITTSBURG, KS - Keith E. Beaver, 87, of Pittsburg, KS passed away on February, 10, 2022 at Via Christi Village in Pittsburg, KS. He had been in good health and living independently until he had a stroke in March of 2021, which declined his health.... View Obituary & Service Information

The family of Keith E. Beaver created this Life Tributes page to make it easy to share your memories.

Send flowers to the Beaver family.