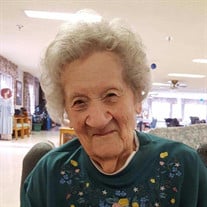 Josephine Renn, age 101 passed away Friday, January 26, 2018 at 7:23 a.m. at Medicalodges Frontenac. She had been a resident of Medicalodges Frontenac (Sunset Manor) since April 2006. She was born October 8, 1916 to John and Mary Terlep Zagar in Girard, Kansas. She attended Crawford County schools. Josephine and her three brothers and two sisters had many chores to do on the farm and she could do the work that any man could do. Josephine married John L. Renn on April 14, 1943. They were married for 56 years before John passed away in June 1999. Together they farmed, raised chickens, pigs, cattle, rabbits and sheep and at one time helped their son take care of his ostriches. It was not a rare sight to see Josephine out in the fields plowing and discing the ground before John got home from work at Hull and Dillon Packing Co. They would spend their evenings planting crops until dark then take care of their animals. She always had a large garden and did a lot of canning and freezing vegetables. She was an excellent cook and always had a homemade meal ready when the chores were done. Her specialties were fried chicken and apple strudel. She was a good carpenter as well, helping her husband, son and daughter in law build houses. Whether she was swinging a hammer, plowing a field or baking, she excelled. She was a member of Lodge 225 of the Slovene National Benefit Society, where she outlived her insurance policy in 2012. In all the years while she was at the nursing home, her pride and joy, Granddaughter Paula, would visit her grandma almost every day, which they both enjoyed very much. Josephine is survived by her son John C. (Theresa) Renn, Granddaughter Paula Renn-Smith (Doug Eller), Grandsons Brian (Tammy) Renn and Jason Renn, Brother Frank Zagar, great-grandchildren, Shelby Smith, Grant Smith and Kinley Renn and many nieces and nephews. She was preceeded in death by her parents, husband, John L. Renn, two sisters, Mary Zagar and Ann Howell, two brothers, John Zagar, Joe Zagar and a great-grandson, Cody Renn. A visitation will be held Sunday, January 28, 2018 from 2:00-3:30 pm at Bath- Naylor Funeral Home in Pittsburg. A private family burial will be held at Garden of Memories Cemetery. A memorial has been established to The Renn College Education Fund for her Great-Grandchildren. Condolences may be left at our website www.bathnaylor.com. Arrangements are under the direction of Bath-Naylor Funeral Home of Pittsburg, KS.

The family of Josephine Renn created this Life Tributes page to make it easy to share your memories.

Send flowers to the Renn family.