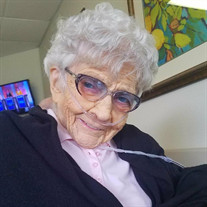 Josephine “Dolly” Ruth Hoffmann 83, of Riverton, KS died 3:00pm Saturday June 17, 2017 at her home surrounded by family and loved ones. Dolly was born May 5, 1934 in Detroit, Michigan the daughter of Anthony and Josephine (Jessa) Brazas. Dolly has lived in the Riverton, KS area for the last 10 years having moved from Phoenix, Arizona. On February 23, 1957 Dolly married John Adam Hoffmann in Chicago, Illinois; he preceded her in death on August 24, 1975. Dolly was of the Catholic Faith. She was a very talented and creative woman. She enjoyed photography, various crafts and building things at her home including a gazebo she designed herself. Dolly will most be remembered as being a loving mother, aunt, sister and daughter and she will be dearly missed. Survivors include her daughter Julie Hoffmann Janisch and husband Roy of Columbus, KS; nieces and nephews who were like her children, Edward Brazas, Jr of Phoenix, Robert Abbott of Colorado, Edward Brazas III of Kansas, James Brazas of Missouri, Vickie Brazas McDonald and husband Christopher of Kansas, Anthony Brazas of Missouri, Travis Brazas of Missouri and Desiree Brazas Thiele and husband Mitchell of Texas; brothers Duane Johnson of Riverton, KS and Edward Brazas Sr. of California. Dolly was preceded in death by her husband, parents, brother Anthony Brazas and niece Roberta Brazas. Per Dolly’s wishes private services will take place at a later date. In lieu of flowers the family asks expressions of sympathy to be in the form of memorials to the SE Kansas Humane Society. Friends may drop off or mail memorials to the Bath-Naylor Funeral Home 611 S. East Ave. Columbus, KS 66725. Condolences may be left at www.bathnaylor.com. Arrangements are by Bath-Naylor Funeral Home of Columbus, KS.

The family of Josephine Ruth Hoffman created this Life Tributes page to make it easy to share your memories.

Send flowers to the Hoffman family.