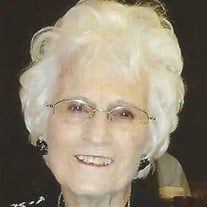 OLATHE, KS – Josephine “Peppy” Arabia, 92, of Olathe, formerly of Frontenac, KS, died August 19, 2017 at Homestead of Olathe North in Olathe, KS. She was born December 28, 1924 in Franklin, KS the daughter of Anton and Anna Gorisek Strukel. She had been a Frontenac resident from 1953 until 2014, when she moved to Olathe to be close to her daughter. She married Tom Arabia on May 7, 1949 at St. Phillips Catholic Church in Franklin, KS. He preceded her in death in 1970. Mrs. Arabia worked at the Kansas Ordinance Plant in Parsons and A. & I. Engineering Co. in Pittsburg for a number of years. Later she worked as a domestic worker and care giver for various families until retiring. She was a member of Sacred Heart Catholic Church in Frontenac, KS. Survivors include one daughter Janice M. Roberts of Olathe, one sister Irene Pristernik of Ft. Worth, Texas, two grandchildren and two great-grandchildren. She was preceded in death by her parents, husband, a son Monty Arabia, five brothers Anton, Bill, Jack, Joe (her twin), and Johnny Strukel, four sisters Mary Strukel, Annie Strukel, Frances Girard and Katherine Girard. Mass of Christian burial will be 11 am Thursday, August 24, 2017 at the Sacred Heart Catholic Church in Frontenac, with Father Thomas Stroot, as celebrant. Music for the mass is by Sharon Barone. Burial will be in the Pittsburg Garden of Memories. The parish rosary will be recited at 10am Thursday, August 24, 2017 at the Friskel Funeral Home, 230 E. McKay, Frontenac, KS. The family will receive their friends after the rosary service until service time. Friends may call from 10am to 5pm Wednesday, August 23, 2017 at the funeral home. A memorial has been established to the Shrine Crippled Children’s Foundation in care of the funeral home. Condolences for the family may be left at our web site www.friskelfuneralhome.com.

The family of Josephine Arabia created this Life Tributes page to make it easy to share your memories.

Send flowers to the Arabia family.