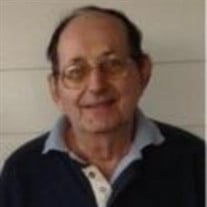 Joseph Nicholas (Joe) Pecnik, 73, of Pittsburg, died Monday, December 13, 2021, at 12:29 P.M., at Landmark Hospital, Joplin, Mo. He was born December 7, 1948, at Villach, Austria, son of Joseph and Frances (Habjan) Pecnik. He immigrated to America with his parents in 1951. Joe graduated from Trinity Prep High School, Sioux City, Iowa, and received his bachelor’s degree from Conception Seminary College, Conception, Mo., in 1969. Following college, he taught in the inter-city of St. Louis, Mo., and served in the U.S. Peace Corps. Subsequently, he worked here in Pittsburg at the U.S. Census Bureau and Superior Industries. Membership was held in Our Lady of Lourdes Parish. He traveled extensively, both in the U.S. and internationally. He was a kind man with a special dedication to the poor. He was preceded in death by his parents. Survivors include three sisters; Francie (Blaine) Taylor, of Miami, Okla.; Anna (Jerry) Lomshek, of Chicopee, and Janie (Jimmy) Burrow, of Pittsburg. In addition, he is survived by seven nieces and nephew; Janez (Ali) Lomshek, Overland Park; Jasna (Gregor) Kalan, of Chicopee; Jurij (Melissa) Lomshek, Kirkwood; Anamarie (Francis) Johnson, Dallas, Tx.; Joseph (Krissy) Taylor, Pittsburg; Christian (fiancé Natasha) Taylor, Kansas City, Mo.; Lee Burrow, Lonoke, Ark.; 13 grand nieces and nephew, and numerous cousins in the U.S., Austria and Slovenia. A Funeral Mass will be celebrated Friday, December 17, 2021, at 2:30 P.M., at Our Lady of Lourdes Catholic Church. A rosary will be recited prior to the funeral at 2:00 P.M at Our Lady of Lourdes Catholic Church. Burial will follow at Highland Park Cemetery. Memorials may be made for Masses or to Our Lady of Lourdes Memorial Fund. Arrangements are under the direction of Bath-Naylor Funeral Home in Pittsburg, KS.

The family of Joseph Nicholas Pecnik created this Life Tributes page to make it easy to share your memories.

Send flowers to the Pecnik family.