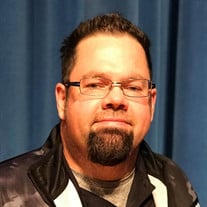 Jonathan Lee Matson, 46 of Galena, KS died January 18, 2019 at his home following a sudden illness. He was born February 21, 1972 in Kansas City, Missouri the son of Johnnie and Patricia (Portwood) Matson. He graduated from the Pittsburg High School with the Class of 1990, he then went on to PSU where he graduated with a bachelors degree in communication. On March 14, 1998 he was united in marriage to Kerri Evans in Galena, KS; she survives of the home. Jon was honored to be ISL Coordinator at Easy Living, Inc. because he was proud of this organization and he loved working with individuals with special needs. He attended the Galena United Methodist Church, but grew up in Free Holiness in Pittsburg, KS. He was a longtime volunteer with Special Olympics. He coached several youth sports teams that his sons were a part of in Pittsburg and Columbus, KS. He was very active in the Joplin Little Theatre, the Cherokee County Arts Association, and church plays. He was passionate about music and had been a member of several bands and had played drums at church. He also owned Mushi’s DJ service. His greatest accomplishment was being a father. He loved teaching his children about some of his favorite things, such as fishing, the Kansas City Chiefs, the Kansas City Royals, WWE, and music. Additional survivors include his four children: Kolby, Brody, Samuel Matson all of the home and Monica Matson of Ft. Worth, TX, His mother Patty Matson and sister Jennifer Matson both of Pittsburg, beloved Uncle & best friend Randy Jones and aunt Mary, cousins Alex Jones, Stephanie Mburu and her children, Myra, Carissa, Weeza; His parents by marriage Larry and Shirley Evans, sister and brother in law Misty and Justin Smith, his nieces and nephews, Kris, Kenna, Kynlee, and Knox Corum, Brant Remmington, Jazzy and Tysie Smith, Destiny and Iyionna Basauri. He was preceded in death by his father John Matson, paternal grandmother Daisy Matson and his maternal grandparents Frank and Geraldine Portwood. Funeral services will be 2pm Thursday, January 24 at the Bath-Naylor Funeral Home in Pittsburg with Rev. Dorcia Johnson and Rev. Clayton Cooper officiating. Burial will follow in the Rosebank Cemetery in Mulberry, KS. The family will receive friends at the funeral home from 6-8 pm Wednesday. Condolences may be left at www.bathnaylor.com. Memorials may be made to Jon Matson Children’s Education Fund; these may be left at or mailed to the funeral home.

Jonathan Lee Matson, 46 of Galena, KS died January 18, 2019 at his home following a sudden illness. He was born February 21, 1972 in Kansas City, Missouri the son of Johnnie and Patricia (Portwood) Matson. He graduated from the Pittsburg High... View Obituary & Service Information

The family of Jonathan L Matson created this Life Tributes page to make it easy to share your memories.

Send flowers to the Matson family.