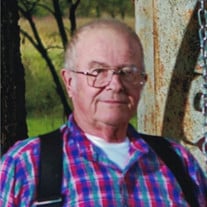 Jon Wesley Holt, 74, of Columbus, passed away on May 26, 2019 at Mercy Hospital Columbus. Jon was born to Wayne and Mary Holt on January 31, 1945. He went to school at Lone Elm School and graduated from Cherokee County Rural High School in 1962. While attending Cherokee County Rural High School he was President of the Future Farmers of America. He married Alice Janeski on June 28, 1969 in Girard. He worked as a farmer most of his life and retired from farming in 2001. He opened Shawnee Creek Preserve around 1987 becoming actively involved in both 4-H shooting sports and became a Hunters education instructor in 1990 remained active until 2016. He received the Order of the Buffalo award for services above and beyond the role of instructor in 2007, as well as, Instructor of the Year in 2007. He received an award of appreciation from 4-H shooting sports in 1999. He was a veteran and served in the U.S. Army Reserve. Jon enjoyed being out at the range with everyone, the farm, helping with 4-H Shooting Sports and his cats. Jon is survived by his wife Alice, Sister Marva Holt, Mother Mary Holt, Sister in law Louise Hart, nephews Gerald Holt, Gale Holt, Gregg Holt and his wife Lori, 3 great nephews, 1 great niece, and 1 great great niece and nephew. Jon is preceded in death by his father Wayne Holt, brother Gary Holt and a great niece. Funeral Services will be held at 10 AM Friday, May 31, 2019 at the Bath-Naylor Funeral Home in Columbus, with Pastor Neal Anderson of Bethlehem Methodist Church, officiating. Burial will follow at the Lone Elm Cemetery in Columbus. The family will receive friends Thursday, May 30, 2019 from 6-7pm at the Bath-Naylor Funeral Home. In lieu of flowers, the family suggests memorials to be sent to the Cherokee County 4-H shooting sports .Condolences may be left at www.bathnaylor.com. The family of Jon Holt wishes to extend our sincere thanks to Mercy Hospital Columbus, Cherokee County Ambulance Association, and Columbus Fire Department.

Jon Wesley Holt, 74, of Columbus, passed away on May 26, 2019 at Mercy Hospital Columbus. Jon was born to Wayne and Mary Holt on January 31, 1945. He went to school at Lone Elm School and graduated from Cherokee County Rural High School in... View Obituary & Service Information

The family of Jon Wesley Holt created this Life Tributes page to make it easy to share your memories.

Send flowers to the Holt family.