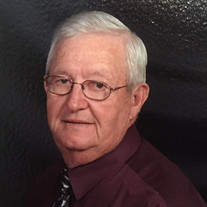 John R. Thompson, lifetime resident of Weir, KS, passed away Wednesday morning November 23, 2016 at his home after a courageous battle with cancer. He and his family had celebrated his 80th birthday earlier this year. John was born July 22, 1936 to James R. Thompson and Helen E. Thompson in Weir, KS. His father was killed during WWII when John was only 8 years old, so he learned about hard work and responsibility at a very young age. On April 29, 1955 he married the love of his life, Francene Rene Ping. They were best friends and during their 61 years of marriage, rarely spent a day apart. They took great pride in their family and many of John’s favorite moments were spent with this children, grandchildren and great-grandchildren. John was a deacon of the First Baptist Church in Weir and he and Francene were very active in the church for many years. In their later years, John and Francene were members of the First Church of the Nazarene of Pittsburg, KS where they made many new friends and were involved in the senior Sunday School class. John also served a term on the Weir City Council. After he and Francene were married, John worked in the construction field for several years while raising a young family. In the late 1970s, John went to work in the Pipefitter’s Union and spent over 20 years at the Parsons, KS ammunition plant before retiring in 1998. John especially enjoyed his retirement years and could often be seen working in the yard and mowing the several acres that surrounded his homestead. He and Francene volunteered their time working with the Cherokee County Meals on Wheels Program for several years. John is survived by his wife, Francene Thompson of Weir, KS; son, John R. (Janie) Thompson, Jr. of Ozark, MO; daughter Francena (Brian) Harding of Tulsa, OK; daughter Felecia (Jeff) Cowan of Ponca City, OK; son Ed (Carla) Thompson of Chicopee, KS; sister Shirley Williams of Weir, KS; grandchildren Chad Walker, Gabe (Jestine) Walker, Brooke (Jacob) Rogers, John R. (Jessica) Thompson III, Abby (Nathan) Bilyeu, Seth (Mykayla) Thompson, Jenny Cowan, Lauren (Shelby) Smoker, Kayla Thompson and Madison Thompson, 9 great-grandchildren and numerous nieces and nephews. John was preceded in death by his parents, his brother James Thompson, grandmother Josephine Walker, brother-in-law Carl Williams and mother-in-law Genevieve Ping. The family would also like to express their gratitude to the care-givers, Becky Jenkins, Brenda Swearingen, Glenda Madl, Stephanie Edwards, Kim Boyer and Connie Wallace, who provided comfort and support in his final days. A special thanks to Harry Hynes Memorial Hospice. Services will be 2 pm Monday, November 28, 2016 at the First Church of the Nazarene with Rev. Jim Sukraw officiating. Burial will take place before the services at 12 pm in Park Cemetery, Columbus, KS. The family will receive friends at the Bath-Naylor Funeral Home in Weir from 6-8 pm on Sunday. Condolences may be left at www.bathnaylor.com. Memorials may be made to the First Church of the Nazarene; these may be left at or mailed to the funeral home. Services and arrangements are under the direction of the Bath-Naylor Funeral Home of Weir, KS.

John R. Thompson, lifetime resident of Weir, KS, passed away Wednesday morning November 23, 2016 at his home after a courageous battle with cancer. He and his family had celebrated his 80th birthday earlier this year. John was born July 22,... View Obituary & Service Information

The family of John R. Thompson created this Life Tributes page to make it easy to share your memories.

Send flowers to the Thompson family.