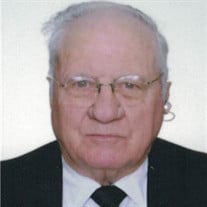 John U. Parolo, 94, of Croweburg, Kansas, passed away on February 12, 2019 at Via Christi Hospital in Pittsburg, Kansas, following an illness. He was born October 11, 1924 in Croweburg, Kansas, the son of Ugo and Elizabeth (Miotti) Parolo. He attended Croweburg Grade School and graduated from Arma High School in 1941. As a young boy, he was baptized in the Catholic Church and continued his devotion and faith praying the rosary daily. He enlisted in the United States Army on November 27, 1942 and was a private first class serving in the 13th Armored Division during the European Theater of WWII until his discharge on October 26, 1945. He was wounded on April 13, 1945 near Cologne, Germany which left him with severe hearing loss. He received the Purple Heart, ETO Ribbon and two Bronze Service Stars for his service. John went to work for McNally Manufacturing in Pittsburg, KS for 3 years before moving to Wichita, KS and working for The Boeing Company as a machinist for 35 years until his retirement in 1989. Following his retirement, he moved back to Croweburg to live with his sister Isadore Stefani. John had a love for fishing and travel. His many fishing trips included 30 trips to Canada, 2 to Alaska, and 1 to the Caribbean. His other travels included 9 trips to Italy to visit relatives, a trip to Egypt and the Holy Lands as well as several other European countries with his sister Isadore. He also enjoyed attending his 13th Armored Division "Black Cats" Army reunions and connecting with his fellow comrades and their families. He was a generous and loving man who donated to many charitable causes. John was a member of St. Joseph Catholic Church, Arma, KS, American Legion Post #182 in Arma, KS, and Knights of Columbus Council #883 in Pittsburg, KS. John is survived by his niece, Edwina Waterman of Scammon (formerly Croweburg), KS, who he was very close to as they shared many happy times and meals together, his nephews Ernest (Carrie) Amershek and Richard Amershek of McCune, KS and his niece in law Victoria Amershek of Springdale, AR. Additional survivors include his great niece, Tracey (Carl) Mussa of Scammon, KS who provided for his care during his illness. He is also survived by several great nieces and nephews and their families as well as extended family in Italy. He was proceeded in death by his parents; two sisters, Isadore Stefani and Ernesta Amershek; nephews, Jackie Amershek, Frank Amershek and Steven Stefani; niece, Mary Amershek and nephew in law, Terry Waterman. Mass of Christian burial will be 10:00 A.M. Tuesday, February 19, 2019 at St. Joseph Catholic Church in Arma, KS with Father Floyd McKinney as celebrant. A rosary will be recited at Friskel Funeral Home in Frontenac, KS on Monday, February 18, 2019 at 6:30pm where friends may call (620)-231-7360. In lieu of flowers, the family suggests memorials to the Arma/Northeast Alumni Association for scholarships or the charity of your choice. Friends may drop off or mail memorials to the Friskel Funeral Home, 230 E. McKay, Frontenac, KS 66763. Condolences may be left at www.friskelfuneralhome.com. Arrangements and services are under the direction of Friskel Funeral Home of Frontenac, KS.

The family of John U. Parolo created this Life Tributes page to make it easy to share your memories.

John U. Parolo, 94, of Croweburg, Kansas, passed away on February...

Send flowers to the Parolo family.