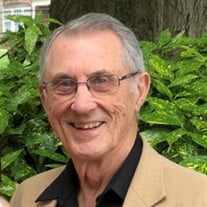 John C. Martel 84 of Pittsburg, KS passed away suddenly at home on Saturday, June 5, 2021. He was born on April 21, 1937 in Kansas City, KS to Alexander M. Martel and Bonnie Mae McGilton Martel He married Bernice (Bea) H. Wetter on September 9, 1961 at St. Augustine's Catholic Church in Washington, KS and they would have celebrated their 60th wedding anniversary this September. She survives of the home. John was a graduate of Washburn University with a B.A. degree in Economics. He was employed in the grocery industry for 35 years with the following companies: A & P, Martel Grocery, Associated Wholesale Grocers, Foodtown, Hudson-Thompson, and Piggly Wiggly. He was also a small business owner in Arma, KS. John was an active member of Our Lady of Lourdes Catholic Church and served in several leadership roles. He felt strongly about contributing to the community and volunteered his time and skills. He served with Sunflower Kiwanis of Pittsburg, St. Mary's Bargain Corner, The Lord's Diner, Zone 6 Garden Club and Miners Hall Museum. He also served as 2010-2011 District Governor for the Kansas District of Kiwanis. John enjoyed gardening at his home, the St. Joseph's Suites and Franklin Park. Additional survivors include a son John G. (Ida) Martel of Tampa, FL; two daughters: Ann M. (Brandon) Grigg of Pea Ridge, AR; Renee L. (Brent) Comfort of Olathe, KS, two brothers Ernest of Kansas City, MO, and Bernard (Jan) of Medina, OH, along with three grandchildren, Kathryn Martel, Daniel Martel, and Erin Comfort-Rotramel (Logan);and several nieces and nephews. He was preceded in death by his parents and step-mother Doris Crenshaw Martel and an infant brother. Mass of Christian Burial will be 10am Wednesday, June 9th, 2021 at Our Lady of Lourdes Catholic Church with Fr. Jerome Spexhearth as celebrant. Burial will follow at Garden of Memories Cemetery. Parish rosary will be recited at 7pm Tuesday evening where visitation will precede the rosary beginning at 6pm. Memorial contributions may be made to American Heart Association, Our Lady of Lourdes Memorial Fund, or the charity of your choice; these may be left at or mailed to the funeral home. Condolences may be left at www.bathnaylor.com. Services and arrangements are under the direction of the Bath-Naylor Funeral Home 522. S. Broadway Pittsburg, KS.

The family of John C. Martel created this Life Tributes page to make it easy to share your memories.

Send flowers to the Martel family.