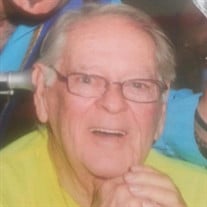 John Joseph “Jack” Coomes, 85, of Frontenac, KS, died on July 6, 2020 at his home with his wife Martha by his side. Jack was born July 24, 1934, in St. Paul, KS. He was the son of Ray and Cora (Brazil) Coomes. Jack served in the United States Navy during the end of the Korean War. He was a prisoner of war and served as a Navy Seal. He enjoyed staying in touch with his Navy buddies throughout the years, even traveling to meet each other on several occasions. Jack was raised in St. Paul, KS. and was brought up with hard work and believed in truth and honesty. He attended Catholic School all years of growing up and served as Alter boy in St. Paul. Jack had a zest for life and a passion for his work. Jack played the trombone in the military and in a local band the “Rhythmaires”. He loved working with his crew and building steel buildings. He has built hundreds of commercial buildings in the four-state area. He was known for being a tough on the outside but had a heart of gold, he liked helping people whenever he could. He loved reminiscing about the years gone by and visiting with friends and family. On July 6, 1962, Jack married Martha Lou Bowman in Miami, Oklahoma, their marriage was later blessed at the St. Mary’s Catholic Church. He was a member of the Frontenac City Council for over 12 years and served many terms as the mayor. He was also a member of the VFW, a member of the Shrine and was a 32nd degree Mason, and a member of the NRA. Jack was the owner/operator of Jack Coomes Steel Buildings Sales & Erection for over 50 years. Jack enjoyed quarter horses and horse shows, he was also a horse show judge for many years. He loved the Lake of the Ozarks and developed lifelong friendships there. He loved being with his family, boating, riding his wave runner, sitting on his dock and porch, working around his home place, and doing carpentry work. He liked watching his grandchildren compete in their swimming events. He also had a passion for vintage cars. Especially old El Camino’s and Corvettes. He loved going to the beach and traveling in years past. Cruising the seas was one of his favorites. He did not officially retire until 2019 and sold buildings until he died. He was known to be an extremely hard worker with a never give up attitude. He was always the first one up in the morning and was first one on the job. He also loved site seeing with his wife Martha. He loved riding around with his dogs, and always traveled with them when he could. He was a huge animal lover with a soft spot for children. He would always help a less fortunate family in any way he could. He survived by his wife: Martha Coomes and his son: James Joseph Coomes, his daughter: Brenda Coomes-Amrein and her husband: John T. Amrein of Bonner Springs, KS. His two grandchildren: Lauren Tracy Stephens and her husband: Keith Stephens of Bonner Springs KS. And his Grandson: John Thomas Amrein of Bonner Springs Ks. Jack was preceded in death by his parents, two brothers, a sister, and an infant sister. Mass of Christian Burial will be held at 10:30 am, Friday, July 10, 2020 at the Sacred Heart Catholic Church with Father Philip J. Voegeli as celebrant. The parish rosary will be recited at 10 am prior to mass at the Sacred Heart Catholic Church. Memorial donations may be made to the St. Jude’s Children Hospital, Friends may drop off or mail memorials to the Friskel Funeral Home in his name, 230 E. McKay Frontenac, KS 66763. E-mail condolences may be left at www.friskelfuneralhome.com. Arrangements are by Friskel Funeral Home of Frontenac, KS.

The family of John Joseph "Jack" Coomes created this Life Tributes page to make it easy to share your memories.

Send flowers to the Coomes family.