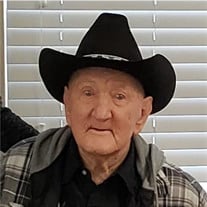 John Thomas Brown (JT or Johnny) was born in Lockwood MO on April 4, 1919, to Euard Thaxton Brown and Elva Mattrisa Priddy Brown. As a young man he raised prize winning live stock and helped farm on the family farm. He married Esther Ruth Wilcox on June 15, 1942. (They were married for just short of 76 years) John served in the Army during WWII and was a decorated soldier, and also a German Prisoner Of War. After his military service, he attended Agriculture College and studied genetics. For years he raised cattle, rabbits, birds and dogs, practicing selective breeding that made his champion livestock sought after for breeding stock. He was preceded in death by his parents, his sister, Irene Brown Newman, his brother, E. Delbert Brown, and his wife, Esther. He is survived by his children, Lylian Brown Rogers of Benton, Kentucky, Nancy & Laddie Tabor of Columbus, Kansas, John David Brown & Lane Thaxton Brown of Flagstaff, Arizona, Norman & Diann Braun of Osawatomie, Kansas, and Daughter’s in law Marlen Brown and Karen Brown. John & Esther lived in Williams, AZ for several years before returning to the Midwest in 1992. They have lived together in Fort Scott Medicalodge, Ft. Scott, KS since 2013 John worked twice at the College of the Ozarks and was honored for his military service by Tom Brokaw, Author of “The Greatest Generation” in 2004. Inurnment will be at the Fort Scoot National Cemetery with full military honors at a later date.

The family of John Thomas Brown created this Life Tributes page to make it easy to share your memories.

John Thomas Brown (JT or Johnny) was born in Lockwood MO on April...

Send flowers to the Brown family.