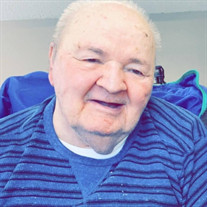 John Joseph Alartosky Sr. went to be with the Lord on December 15th 2020 around 1:50pm. John died peacefully in his bed Pittsburg Care and Rehab (PCR) with his daughter and son-in-law by his side. God was gracious and John was afforded the opportunity to see his son John, daughter in law Jenny, grandson Zack, granddaughter Molly, son-in-law Wes and Terri his daughter. John’s oldest daughter Debbie was able to see him through a video call prior to his passing. John was completely surrounded by love ones not only from his bio family but from his PCR family. John was Born July 14, 1942 In Haverhill, Massachusetts. John was a member of the Air Force where he was educated in plane and auto maintenance. John spent a lot of his time in Alaska and was quite the photographer. John was an auto mechanic following his enlistment. John met his wife Barbara on the CB radio. The two were married two weeks later. Barbara preceded John and death by 67 days, the couple have been married for 57 years. John was also preceded in death by his brother Edward and his sister Nancy. John was an amazing father, a good husband and an all-around great guy. John was a member of the Church of Jesus Christ of latter-day Saints and he took his membership very seriously. John was always there to help others and loved deeply. John enjoyed his missionary services greatly and found great satisfaction in leading others to Christ. The last six years of John’s life we’re spent at Pittsburg Care and Rehab due to severe stroke. John’s stay at Pittsburg Care and Rehab was not what you would expect from a nursing home. John was love by all and treated with kindness and dignity. The staff were are all considered members of our family and that’s how they treated us. I could not ask for a better place for my father to have been. One of dad’s staff has shared a memory . . . John was always laughing. He loved joking around and always seemed to be in a good mood when I was with him. He always made my day better. Darcy John will be missed by many and the world is not the same without him here. The family will have a private, simple cremation. A celebration of life will occur when we are safe from COVID, for both John and Barbara. If you would like to be informed as to when, please leave your information here so we may call you or send you a card or letter. Thank you

John Joseph Alartosky Sr. went to be with the Lord on December 15th 2020 around 1:50pm. John died peacefully in his bed Pittsburg Care and Rehab (PCR) with his daughter and son-in-law by his side. God was gracious and John was afforded the opportunity... View Obituary & Service Information

The family of John Joseph Alartosky created this Life Tributes page to make it easy to share your memories.

John Joseph Alartosky Sr. went to be with the Lord on December...

Send flowers to the Alartosky family.