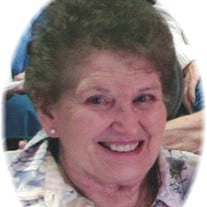 JoAnn Knaup, 87, of Frontenac, KS, was called by the Lord on February 17, 2018 to be with her husband, daughter, twin sister, brother and parents. JoAnn was born June 4, 1930 in Frontenac to Joseph and Nellie Brock. She attended Sacred Heart Catholic Elementary School and graduated in 1948 from Frontenac High School. JoAnn then attended Mt. Carmel Nursing School and graduated in 1951 as a Registered Nurse. JoAnn married Raymond Knaup on July 3, 1951. She worked for Mt. Carmel hospital until 1965 when she and Raymond purchased a 12-bed nursing home for men in Pittsburg. Two years later, they built a new 50-bed home in Frontenac and named it Sunset Manor. Through years of dedication and compassion for the elderly, the business grew and was awarded the top nursing facility in the area several times over. JoAnn had a philosophy to treat every resident like family and to create a homelike atmosphere. Sunset Manor eventually grew to a capacity of 150 beds and was one of the largest employers in Frontenac with a staff of 145. Throughout the years JoAnn also encouraged and mentored many young people to pursue careers in nursing. In 2007, JoAnn was honored with the Marty Hegarty Distinguished Citizen- Lifetime Achievement Award presented by the Kansas Health Care Association, recognizing her many years of dedication to the elderly. She was selected as a member of the Frontenac Outstanding Alumni and was honored during the Frontenac Homecoming. JoAnn helped start the Frontenac Meals on Wheels program by having the meals prepared at Sunset Manor. This program started 45 years ago and is going strong today thanks to the many volunteers. JoAnn always had time for her family and loved to follow her son’s and grandchildren’s athletic and school events. JoAnn and Raymond had a variety of interests, including being avid antique car collectors and they enjoyed attending car auctions around the country. They also owned and operated the Cedar Falls Lodge and the Boulevard Cafe in Branson, MO. JoAnn also loved her pets and was always in the company of her two Chihuahuas, Buddy and Sugar. JoAnn is survived by three sons, Mike Knaup of Frontenac, Dan Knaup and wife Nikki of Pittsburg, and Kevin Knaup and wife Kristie of Frontenac. JoAnn is also survived by grandchildren Kayla Crowell and husband Ryan of Corpus Christi, TX; Ryan Knaup and wife Jennifer of Bella Vista, AR; Russell Knaup of Pittsburg; Anson Knaup and wife Brenna of Broken Arrow, OK; Brett Knaup of Pittsburg; Shara Knaup and partner Zack of Pittsburg; Laura Clothier of Columbia, MO; Charlie Clothier of Pittsburg; Lindsey Greve of Pittsburg; Kris Knaup, US Air Force; Matt Sayre of Denver, CO; Shannon Frodsham and husband Jim of Vancouver, WA. JoAnn is also survived by ten great-grandchildren; Gabe Knaup, Landon Knaup, Conor Knaup, Finley Knaup, Max Crowell, Zarrah Wood, Ace Wood, Peyton Knaup, Gabriella Frodsham and unborn great-grandson Frodsham. JoAnn was preceded in death by her husband, Raymond; daughter Mary Kristine; twin sister Donna Gintner and brother, Kenneth Brock. JoAnn was a wonderfully caring person and gave to others her entire life. She loved the residents that she cared for, her co-workers, her many friends, and she deeply loved her family. She lived life to its fullest and enjoyed every minute she was given, even during the last few years of her life when her health was failing. She was always on the go, either shopping, out for ice cream or traveling to Branson. She will be sadly missed but fondly remembered by all who were touched by her in some way. The Rosary will be recited Friday at 6:00 pm at Friskel Funeral Home in Frontenac. The family will receive friends immediately following the rosary. Funeral mass will be held Saturday, February 24, 2018 at 10 am at Sacred Heart Catholic Church in Frontenac. Burial will follow at Mt. Carmel Catholic Cemetery in Frontenac. Memorials are suggested to Mt. Carmel Cemetery Fund or Southeast Kansas Humane Society. Services are under the direction of the Friskel Funeral Home of Frontenac.

JoAnn Knaup, 87, of Frontenac, KS, was called by the Lord on February 17, 2018 to be with her husband, daughter, twin sister, brother and parents. JoAnn was born June 4, 1930 in Frontenac to Joseph and Nellie Brock. She attended Sacred Heart... View Obituary & Service Information

The family of JoAnn Knaup created this Life Tributes page to make it easy to share your memories.

Send flowers to the Knaup family.