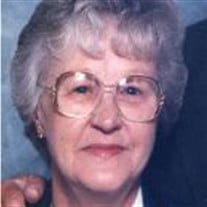 Joan A. Napier, 85 of Pittsburg, died at 8 a.m. Saturday May 21, 2016 at the Via Christi Village Nursing Facility in Pittsburg KS. Prior to her short stay at Via Christi Village, Joan was a 4 year resident of the Carrington Place in Pittsburg. She was born May 28, 1930 in Scammon, KS the daughter of John and Lavon (Riley) Murray. She was a 1945 graduate of Columbus High School. Joan lived most of her life in the Southeast Kansas area, except a short time in the 1990’s when she and her husband Bill lived in Tulsa, OK. Joan married James W. “Bill” Napier Sr. on May 20, 1946 in Scammon; he preceded her in death on June 10, 2003. Joan was a homemaker but while living in Tulsa she worked for Guaranteed Abstract Company. She was a member of the St. Bridget’s Catholic Church in Scammon, the St. Bridget’s Alter Society, the American Blind Association and a former member of Our Lady of Lourdes Catholic Church during the 1960’s and 70’s. Survivors include a daughter Marilyn Keller and husband Tony of Pittsburg; 3 sons James W. Napier Jr. of Fairland, OK; Mike Napier and wife Susan of Ft. Collins, CO; Philip Napier and wife Kathy of Blue Springs, MO; a brother Larry Murray and wife Barbara of Tulsa, OK; sister-in-law Theresa Murray of California; a brother-in-law Steve Rogers of Tulsa, OK; 10 Grandchildren, 28 Great-grandchildren and 1 Great- great-grandson. She was preceded in death by her parents, husband; a brother Jack Murray, 3 sisters Betty Denham and husband John, Edith Brown and husband George and Sharon Rogers. Mass of Christian Burial will be 10:30 a.m. Wednesday May 25th, 2016 at the St. Bridget’s Catholic Church in Scammon with Father Chrysostom Ah Maung as celebrant. Burial will follow in the St. Bridget’s Cemetery. The parish rosary will be recited at 7 p.m. Tuesday May 24th at the Bath-Naylor Funeral Home in Pittsburg where the family will receive friends following until 8 p.m. Friends may call at the funeral home after noon on Tuesday. Condolences can be sent to www. bathnaylor.com Memorial contributions can be made to the St. Bridget’s Alter Society or the St. Bridget’s Building Fund. Memorials may be brought by or mailed to the Bath-Naylor Funeral Home 522 S. Broadway Pittsburg, KS 66762. The family will be at the home of Joan’s daughter Marilyn Keller at 814 E. Quincy, Pittsburg, KS.

The family of Joan A. Napier created this Life Tributes page to make it easy to share your memories.

Send flowers to the Napier family.