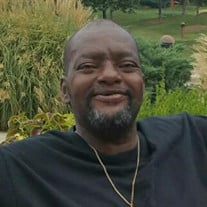 PITTSBURG, KS – Jeffery Murphy, 51, of Pittsburg, died March 4, 2017 at Freeman West Hospital in Joplin, MO. He was born September 14, 1965 in Kansas City, MO, the son of Robert Lee and Joe Johnson Murphy Jr. He had been a resident of Pittsburg since 1980, moving from Arkansas. He was a graduate of Pittsburg High School with the class of 1983. Mr. Murphy worked for Superior Industries in Pittsburg for five years, until ill health forced his retirement in 2004. Survivors include his significant other of 33 years Christi L. Hoagland of Pittsburg, his mother Joe W. Jones of Pittsburg, three brothers Gary Murphy, Mike Murphy and John Murphy all of Pittsburg, one sister Jennifer Johnson of Little Rock, Arkansas, four step-brothers Joe Louis Jones Jr., Jessie Jones and wife Tammie, Anthony Jones and Willie Jones all of Kansas City, Missouri, three step sisters Leedell Lowe and husband Richard, Maria Hubbley and husband Walter and Lavern Diver and husband Shawn all of Kansas City, MO. He was preceded in death by his father, grandparents, aunts, uncles, two nephews and several cousins. The family will receive friends from 6 to 8 pm Thursday, March 9, 2017 at the Bath-Naylor Funeral Home, 522 S. Broadway in Pittsburg. Burial will be in the Porter Cemetery in Watson, Arkansas. Friends may from 2 to 5pm Wednesday at the funeral home.

The family of Jeffery Murphy created this Life Tributes page to make it easy to share your memories.

Send flowers to the Murphy family.