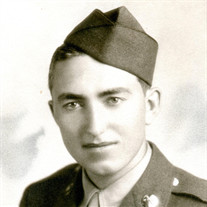 James Howard Shanks, 94 of Columbus, KS died September 22, 2017 at his home. He was born July 24, 1923 in Rural Columbus, KS the son of Henry and Ruth (Joiner) Shanks. James married Betty Jean Fee on March 15, 1947 in Oswego, Kansas, she resides at their home. James worked for Spencer Chemical, Gulf Chemical and later Chevron. His work had him residing in Kansas City, Houston and various other cities before coming back home to Columbus, KS for retirement in 1981. James served our country in the United States Army in WWII. James is survived by his daughter; Glenna (Benny) Vernon of Oswego, KS, brothers; Charles Henry (Jewell) Shanks of Riverton, KS, grandchildren James Shanks, Jo Ann Vernon, Victoria Robbins and Eric Shanks; 2 nieces, 1 nephew and numerous great-grandchildren. He is preceded in death by his parents; Henry and Ruth Shanks, son; Steven H. Shanks, 2 brothers; Glenn and Roger Shanks, and 2 grandkids; Brian and Evan Shanks, Graveside services will be held at 10 am, Thursday, September 28, 2017 at Greenlawn Cemetery in Columbus, KS. Visitation will be held from 6-7pm, Wednesday, September 27, 2017 at the Bath-Naylor Funeral home in Columbus, KS. Arrangements and services are under the direction of Bath-Naylor Funeral Home of Columbus, KS. Condolences may be left at our website www.bathnaylor.com.

The family of James Howard Shanks created this Life Tributes page to make it easy to share your memories.

Send flowers to the Shanks family.