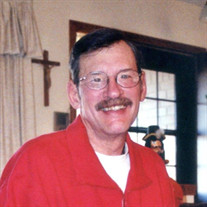 James L. Magan, 69 of Pittsburg, KS, formerly of Dodge City, KS died at 6:07pm Thursday, June 18, 2020 at the Ascension Via Christi Hospital in Pittsburg following a sudden illness. He was born July 3, 1950 in Michigan City, IN, the son of Howard Wood Magan, Sr. and Annabelle Marie (Gohn) Magan. On April 16, 1977 he was united in marriage to Jeannie Herman; she survives him of the home. James was an Army Veteran, serving in the Vietnam War and earning several decorations during his service. He was honorably discharged in December 1975. He worked as an inventory supervisor for Pepsi Cola Bottling, Excel Corporation, and National Beef, all of Dodge City, KS. After moving to Pittsburg, he worked at NPC and the YMCA before retiring. During his retirement, he could often be found with his metal detector, spending time with his family, or at his granddaughters' softball games and dance recitals. Additional survivors include a daughter, Amanda (Dustin) Boyce of Frontenac, KS, a son, Dwayne (Mackenzie) Magan of Olathe, KS; four siblings: Evelyn Castellanos of Bell, CA, Phyllis Sue Kelly of South Bend, IN, Howard Magan, Jr. of Pueblo, CO and Charles Magan of Whittier, CA, and their spouses, along with three grandchildren, Caitlyn and Claire Boyce and Makenna Magan. He was preceded in death by his parents. Memorial Mass of Christian Burial will be 10 am Wednesday June 24, 2020 at the Sacred Heart Catholic Church in Frontenac with Fr. PJ Voegeli as celebrant. Parish rosary will be recited at 7:30pm, Tuesday evening at the church where family will receive friends following the rosary. Memorials may be made to Friends in Service of Heroes. These may be left at or mailed to the funeral home. Services by Bath-Naylor Funeral Home 522. S. Broadway, Pittsburg, KS 66762.

James L. Magan, 69 of Pittsburg, KS, formerly of Dodge City, KS died at 6:07pm Thursday, June 18, 2020 at the Ascension Via Christi Hospital in Pittsburg following a sudden illness. He was born July 3, 1950 in Michigan City, IN, the son of Howard... View Obituary & Service Information

The family of James L. Magan created this Life Tributes page to make it easy to share your memories.

Send flowers to the Magan family.