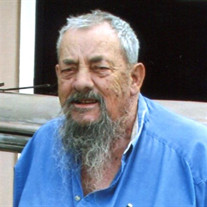 James E. “Jay” Clark, 82 of Pittsburg, KS, died January 3, 2017 at Via Christi Hospital in Pittsburg. He was born February 18, 1934 in Bentonville, AR, the son of Henry and Dorothy (Russow) Clark. He was an Army veteran of the late 1950’s. At the age of 18 he met the love of his life Gala Morton and on October 17, 1953 they were married 54 years when she preceded him in death on August 18, 2007. Jay was a machine operator for Radell Construction for over 35 years. Jay was an avid Hot Rod lover. He owned one of the most classic cars for 56 years. He enjoyed camping and fishing with family and friends and loved mushroom hunting. Jay was known to feed any or all neighborhood animals including possums, he affectionately called “The Night Crew”. Survivors include two sons: Robert (Julie) Clark of Blue Springs, MO and Rodney (Phyllis) Clark of Derby, KS, a daughter Marla Whetzell of Arma, KS; a sister Nora (Ted) Nairn of Big Spring, TX six Grandchildren: Dylan, Wyatt & Morgan Clark, Madison Clark, Jayson Scott & Phillip Oler; three great grandchildren: Kyler & Corgan Oler and Jaxson Scott. He was preceded in death by his parents, wife Gala, a grandson Garrett Addison Clark, two half sisters: Eldora Thigpen & Mary Ethel Helton and a half brother George Earl Clarke and a son-in-law Steve Whetzell Funeral services will be 1 pm Saturday, January 7, 2107 at the Bath-Naylor Funeral Home in Pittsburg with Rev. Dennis Johnson officiating. Burial will follow in the Crocker Cemetery. Family will receive friends at the funeral home Friday evening from 6-8 pm. Condolences may be left at www.bathnaylor.com. Memorials may be made to the SEK Humane Society; these may be left at or mailed to the funeral home. Services by Bath-Naylor Funeral Home 522 S. Broadway, Pittsburg, KS

The family of James E. Clark created this Life Tributes page to make it easy to share your memories.

Send flowers to the Clark family.